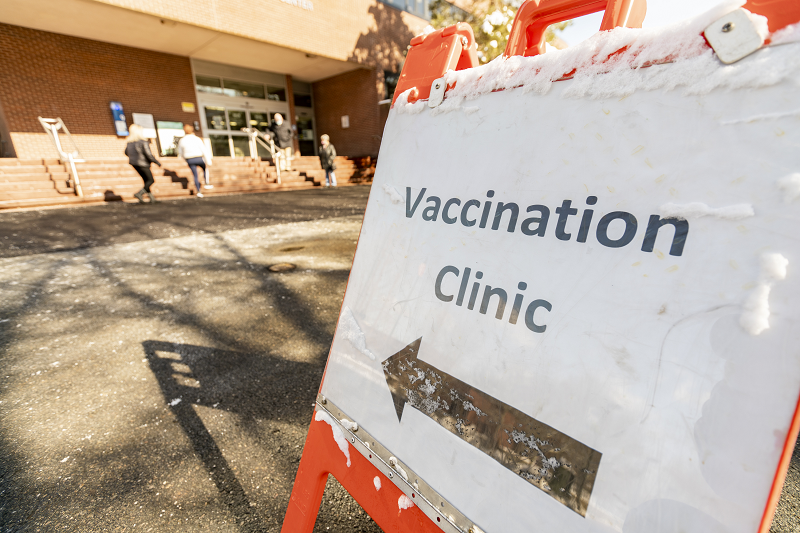 APRIL 12, 2021…..Massachusetts this week will likely cross the threshold of 2 million residents fully vaccinated against COVID-19 and holds the distinction of being the first state with at least 5 million people to deliver at least one dose to more than half of its adult residents, Gov. Charlie Baker said Monday during a visit to a Worcester vaccine site.

More than 5.2 million vaccine doses have been shipped to Massachusetts, and more than 87 percent of those have been administered, according to a Monday afternoon report from the Department of Public Health.

Next Monday, Massachusetts will open up its vaccine eligibility to all people age 16 and older who live, work or study here.

Baker said he continues to hope the federal government’s vaccine supply will “get to the point where they can actually meet demand.”

“I’ve said several times that, you know, supply will be an issue, but I do believe that if supply is there, by the time we get to Memorial Day a significant number of people in Massachusetts will have been vaccinated,” Baker said.

Pressed for a more specific figure, Baker responded, “Tell me what the supply looks like and how much J&J we have,” referring to the one-dose Johnson & Johnson vaccines he often describes as a way to boost capacity and accelerate vaccination.

Public health officials on Sunday reported a seven-day average positive test rate of 2.2 percent and the state is still seeing significant virus case numbers. There were more than 1,800 new cases confirmed on Sunday and state officials estimate there are more than 36,000 active cases in Massachusetts.

As the restrictions on vaccine eligibility drop next week, Baker said how long people will have to wait for appointments will depend on the dose supply from the federal government. He expressed confidence in the state’s vaccine-booking website, which has been updated and modified since its high-profile crash when about a million people became eligible on Feb. 18.

“I’m not worried about the website,” Baker said, then went on to amend that thought.

“That’s not fair,” he said. “I’m always worried about the website, but we’ve been assured that it won’t be a problem, and they’ve run some pretty heavy stress-tests on it.”

Asked about when he might consider relaxing outdoor masking requirements as vaccination proceeds, Baker said a lot will depend on federal guidance, the speed at which people continue to get vaccinated, and “how big a deal” viral variants become, “not just here in Massachusetts and in the Northeast, but around the country generally.”

During the visit to a vaccination site run by Family Health Center of Worcester, officials also touted the role of community health centers — which Baker said have administered more than 300,000 doses of the COVID-19 vaccines — and marked the 15-year anniversary of the state’s landmark health care reform law requiring residents to purchase health insurance.

The law Gov. Mitt Romney signed on April 12, 2006 also created the state authority known as the Health Connector, through which individuals can find and purchase insurance.

Health and Human Services Secretary Marylou Sudders said that Massachusetts now has the highest rate of health coverage, at 97 percent, and that the Connector has “maintained the lowest average premiums of any exchange market in the nation since 2017.”

“The pandemic has made one thing very clear — we can’t always predict what health risks we might face, individually or collectively,” Sudders said. “Throughout the pandemic, our health care system has never been overwhelmed in responding to the health needs of our residents during COVID. Our health system wasn’t overwhelmed because of our strong history and commitment to health care in Massachusetts.”

Sudders said two-thirds of people insured through the Connector will see their premiums decrease starting in May.

She said more people are likely to qualify for “zero- or low-dollar health coverage” because of the federal spending package known as the American Rescue Plan, and Health Connector Executive Director Louis Gutierrez said passage of that legislation makes this “the best time ever to obtain health insurance in Massachusetts.”

The Connector’s extended open enrollment period runs through July 23, and Gutierrez said current members will receive updated premium information this month and next. People who have been on unemployment income in 2021 will be able to obtain Connector plans without premium payments starting in July, he said.

COVID-19 vaccines are free regardless of insurance status.