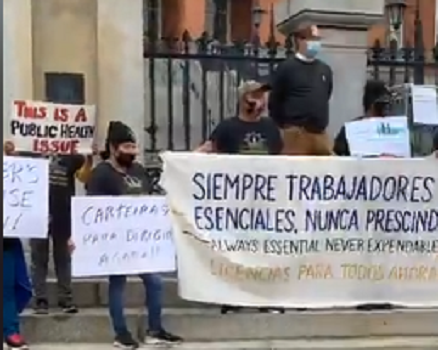 Immigrant rights groups, worker unions, and faith leaders continue to push for a bill that would allow undocumented immigrants the right to obtain Massachusetts driver’s licenses, after a virtual conference this week.

The Work and Family Mobility Act states that people who do not provide proof of lawful presence, including those who are ineligible for a social security number, shall be eligible for a Massachusetts license if they meet all other qualifications for licensure and provide satisfactory proof to the registrar of identity, date of birth and Massachusetts residency. When processing an application for a Massachusetts license, a learner’s permit, or a motor vehicle registration, the registrar shall not inquire about or create a record of an applicant’s citizenship or immigration status.

According to the non-profit group Mass Now, because in Massachusetts you can’t get a driver’s license without proof of U.S. citizenship or lawful presence, it is causing a hardship for as many as 250,000 undocumented immigrants.

The H.3456/S.2289 bill has backing from a list of Massachusetts lawmakers.

According to State Rep. and candidate for Lieutenant Governor Tami Gouveia, 15 other states in the country allow licenses for all who pass the driver’s license exam and driving test.

In a previous statement issued by Natalícia Tracy, PH.D Executive Director Brazilian Worker Center, and Dalida Rocha, 615 New England Political Director, 32BJ SEIU, the two called for the passage “to dismantle part of the structural racism that immigrants face in the Commonwealth.”

“There is no doubt that the socially damaging and unsafe linkage of driving privileges to immigration status is a part of the systemic racism that continues to hold back Black communities. Mobility is necessary. The current pandemic has shown how systemic inequities disproportionately affect Black and Brown communities, many of which are also immigrant communities.”