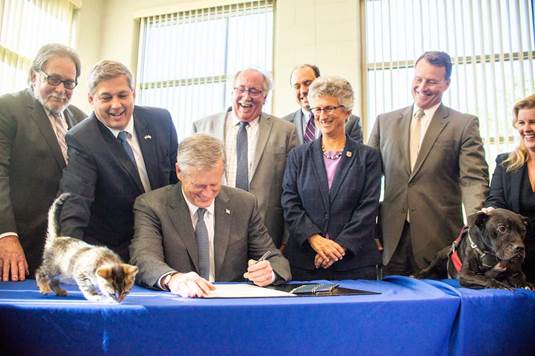 BOSTON – Today, Governor Charlie Baker joined members of the Legislature and the Animal Cruelty and Protection Task Force for a ceremonial bill signing for S.2646, An Act to protect animal welfare and safety in cities in towns (PAWS II).

“Anyone who is found to have abused animals should be held responsible to the fullest extent of the law, and this legislation will help ensure the Commonwealth has appropriate penalties in place to do so,” said Governor Charlie Baker. “The comprehensive PAWS II bill will further the protection and welfare of animals across the Commonwealth.”

“Our administration is grateful for the work of the members of the Animal Cruelty and Prevention Task force in developing recommendations for this bill,” said Lt. Governor Karyn Polito. “Further strengthening the Commonwealth’s animal cruelty laws will help protect vulnerable animals and hold those who abuse animals accountable.”

The legislation is based on recommendations made by the Animal Cruelty and Protection Task Force, which was established by the original PAWS Act, passed in 2014. The Task Force was comprised of representatives of the Attorney General’s Office, the District Attorney’s Association, the State Police, the Department of Agricultural Resources, the MSPCA, the Animal Rescue League of Boston, the Massachusetts Bar Association, an Animal Control Officer and a Veterinarian.

“We applaud Governor Baker and Lt. Governor Polito for their ongoing commitment to enacting laws to protect animals and individuals, while ensuring those who abuse animals are held responsible,” said Elissa Flynn-Poppey, Chair of the Animal Cruelty and Protection Task Force.

“This is one of the most important steps Massachusetts has taken in years to systematically protect pets and wild animals against abuse, cruelty, and mistreatment,” said Senate President Karen E. Spilka (D-Ashland). “As a longtime advocate for the rights of animals and those who own them responsibly, I’m proud and relieved to see this language signed into law.”

“This set of provisions not only increases penalties for mistreatment, neglect and cruelty, it provides critical welfare protections,” said House Speaker Robert A. DeLeo.“This legislation was the result of the analysis and work by the task force. We thank them, my colleagues in the legislature and the animal advocate community for their commitment to this important issue.”

“PAWS II represents the next chapter in our long and active history of passing laws intended to protect animals and ultimately people,” said bill lead sponsor Senate Minority Leader Bruce Tarr. “In addition to lessening animal cruelty, research shows that a person who has committed animal abuse is five times more likely to also commit violence against people – PAWS II is an anti-animal cruelty law and a public safety law.”

“There is zero tolerance in the Commonwealth for any cruelty toward innocent animals,” said Conference Committee Chairman Mark Montigny. “This law takes significant steps towards strengthening protections for our furry friends and holds perpetrators accountable.”

“My passion for animal rights grew only more so when on August 13, 2013, Kiya (better known as Puppy Doe) was discovered lying in a street , at only 18 pounds she was clearly suffering from starvation, as well as, broken bones, burns, dislocated joints, a split tongue, and a stabbed eye,” stated Representative Louis Kafka. “As a result the legislature passed the PAWS ACT to protect animals from this kind of atrocity. Building on what we have already accomplished, I am pleased that the legislature has once again stepped up protections for animals with the passage of PAWS II.”

PAWS II strengthens protections for animals and increases penalties to hold those who harm animals responsible through several measures including:

• Prohibiting drowning of an animal for euthanasia
• Clarifying and updating the law against animal sexual abuse
• Making animal control officers mandated reporters for elder abuse, abuse of individuals with disabilities and child abuse.
• Allowing employees of the Department of Elder Affairs and the Department of Developmental Disabilities to report suspected animal cruelty to local animal control officers with immunity. Employees of the Department of Children and Families may report animal abuse to a police officer with immunity.
• Increasing penalties associated with operating a kennel without a proper license
• Allowing cities and towns, in addition to state officers, to enforce animal-in-car and dog-tethering laws
• Removing the mandate that animals involved in animal fighting must be euthanized, and instead allowing for individual assessments
• Requiring landlords to check vacated properties for the presence of abandoned animals