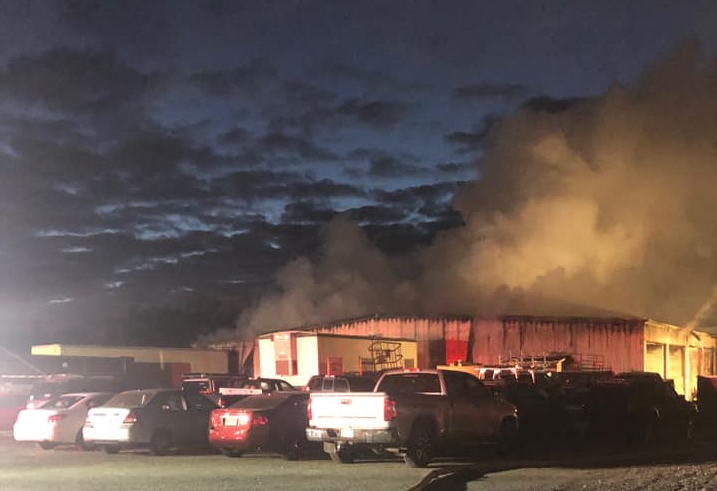 A building was destroyed by fire early this morning in Freetown.

According to the Freetown Fire Department, at approximately 2:35 a.m., the Freetown Police Department was dispatched to the area of 139 Braley Road in East Freetown for a report of fireworks going off. While investigating the source of the complaint, Police officers discovered a building on fire at the rear of 121 Braley Road. At 2:46 a.m., police requested the fire department to be dispatched.

Upon arrival, firefighters found a 100 x 100 commercial building fully involved in fire. A second alarm assigned was quickly transmitted, bringing additional resources to the scene. The fire ultimately required a full second alarm assignment plus one additional engine company. The fire was placed under control at 5:05 a.m., according to officials and all apparatus were clear of the scene by 8:24 a.m.

One firefighter was treated at the scene for a minor ankle injury. Apparatus assigned were Car 1, Engine 1, Engine 2, Engine 3, Ladder 2, and Rescue 2. Mutual aid resources included units from the Berkley, Lakeville, and Rochester Fire Departments as well as Dartmouth Fire District 3. The Fall River Fire Department provided station coverage during the incident. The Massachusetts Department of Fire Services and Providence Canteen provided canteen and rehab services to firefighters.

At the time of the fire, several small rental workshops were located in the building.

The Massachusetts State Fire Marshal’s Office along with Freetown Police and Fire Department investigators are investigating the cause of the blaze.

According to FFD, the building and contents are considered a total loss.