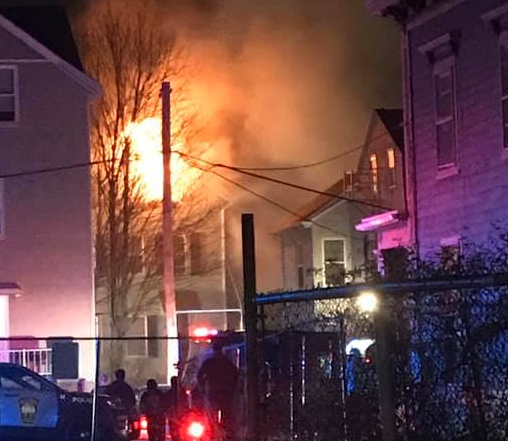 Fall River firefighters battled a serious blaze in the city Friday night that has now been deemed a set fire.

A call came in at approximately 8:20 p.m. with flames showing from the basement at 159 Fourth Street. According to Fall River District Fire Chief Ambrose Smith, crews began fighting the blaze in an offensive manner as the fire spread through multiple floors. The quick moving fire caused firefighters on scene to eventually fight the fire from the outside before being able to return inside the dwelling to put out the flames. Crews remained on scene for approximately 2 hours.

The multi-family home was a total loss, according to Smith.

No injuries were reported, however, a pet cat died.

Despite several residential homes being close to the blaze, fire crews kept damage to a minimum as there was no substantial damage to the nearby dwellings.

Most of the Fall River Fire apparatus was on scene and mutual aid was used from Somerset, Swansea, and Tiverton to cover stations in the city.

The Red Cross responded where they reported at least 5 were displaced.

According to Fall River Fire Public Information Officer Roger St. Martin, the fire has been determined to be arson.

If you have any information on Friday’s fire, contact Fall River Police.