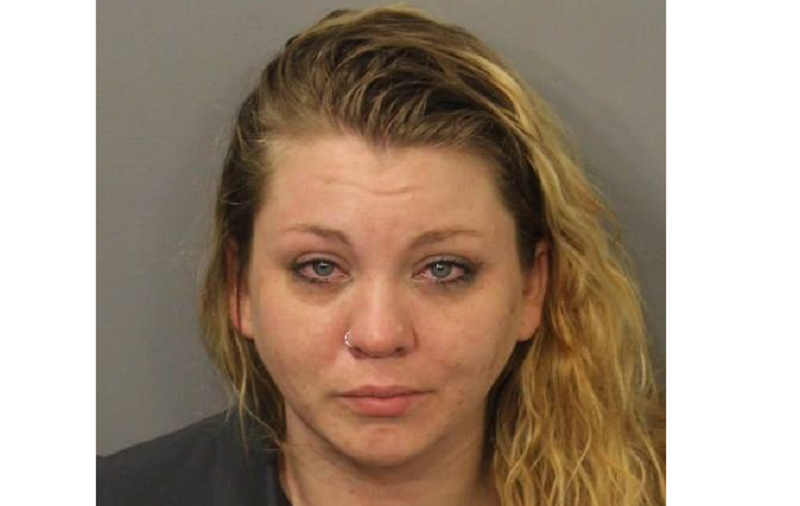 A woman was arrested by Fall River Police Sunday after reported burglaries, property damage, and an assault.

On Sunday, May 20th at approximately 2:05 a.m. Officers of the Fall River Police Department responded to the area of Madison Street between Weetamoe and Hood streets in regards to several home alarms being activated. Victims and Witnesses in the area gave a description of the suspect as female, wearing a hooded sweatshirt and a brown backpack. As Officers canvassed the area, Officers Wendell Burks and Edmond Desmarias heard a loud crash. As they searched they observed a female on the porch of a Weetamoe Street residence. As these officers approached, the female ran. Officer Desmarais was able to corner the female. After a brief struggle and with the assistance of Officers David St. Laurent and Francisco Reis III, she was taken into custody and walked out of the yard.

A canvass of the area was performed by Officer St. Laurent. During this canvass he found two houses were burglarized, one house was damaged by a ladder, a vehicle had its windshield wipers pulled off, a vehicle was struck by flower pots and numerous flower pots were broken. Blood evidence was also located at one of the burglarized homes. The major Crimes Divisions Crime Scene Unit was notified to respond.

This female was transported to Charlton Hospital for treatment of a laceration on her hand. While at the hospital, the female kicked a 39-year-old nurse in the face while being treated.
The female, now identified as Samantha F. Lundbohm, 31, with a last known address of 73 Smith Avenue Newton, Massachusetts, was released from the hospital and transported to the police station where she was charged with 2 counts of Burglary, 5 counts of Vandalizing Property, Disturbing the Peace and Disorderly Conduct, Assault and Battery, and Resisting Arrest.