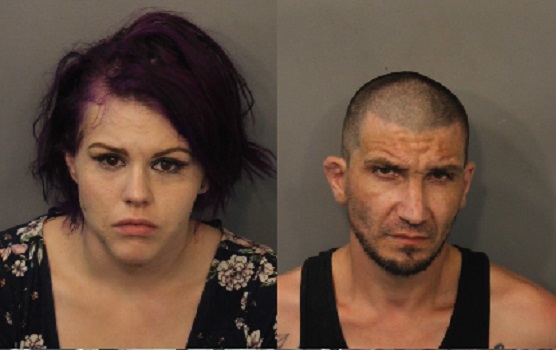 Fall River Police arrested a couple early this morning, one of which is accused of driving at officers and smashing into several parked cars.

According to Sergeant Moses Pereira, just after 1:00 a.m., Officers MacDonald and Bailey, were investigating suspicious motor vehicles in the area of Kennedy Park. Their investigation led to the arrest of Adam Hout, 36 from Cranston, RI on drug charges and resisting arrest. While Officers MacDonald and Bailey were in the park making this arrest, Hout’s girlfriend, Sarah Guy, 29 of New Bedford, drove her vehicle onto the grass and accelerated toward Officer MacDonald forcing him to move out of the way of the vehicle. At this point, Guy left the park area in the direction of South Main Street.

A short time later, Officer Kenneth Medeiros located Guy and her vehicle in a parking lot in the area of Clark Street. As Officer Medeiros began to approach the vehicle, the vehicle again took off colliding with two parked motor vehicles before exiting the parking lot and driving up Clark Street.

As this occurred, Officers Fournier and Ferreira were traveling down Clark Street. Officers Fournier and Ferreira observed Guy’s vehicle traveling directly at them and they attempted to pull to the right side of the road. Guy proceeded to collide with a parked motor vehicle along with the marked police cruiser. As the Officers exited their cruiser, Guy continued to rev her engine while attempting to flee the scene.

One Officer sustained a minor leg injury when Guy’s vehicle struck the police cruiser. He was treated at St. Anne’s Hospital and released.