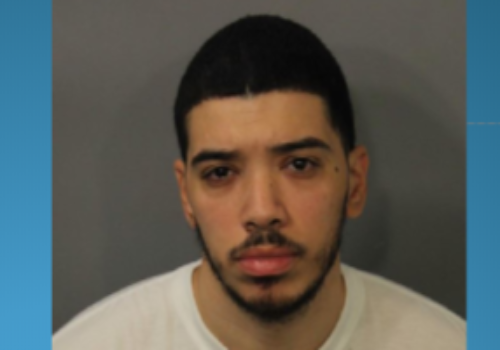 On July 25th, 2019 at approximately 12:30 p.m., Uniform Division Officer David DelValle was dispatched to 526 South Main Street (Glass House Smoke Shop) in response to a citizens’ complaint of drugs being sold inside the business. The caller also said there was a gun in the back of the business. Uniform Officer Eric Pacheco and Special Operations Division Officer Fred Mello responded to assist.

On arrival, Officers encountered only one person in the establishment identified as Aaron Houtman. Houtman claimed to be an employee and stated there was no one else in the building and there were no weapons. Due to the possibility of a firearm being present, a protective sweep was performed. During that sweep, Houtman got up from his seat and quickly walked toward the rear room of the business, the room where the citizen said the gun was. Houtman was ordered to stop. Officers looked behind a partition and observed a large amount of suspected marijuana, a scale, and plastic packing materials. Officer Mello observed what appeared to be a black colored shotgun hanging from a sling on the rear wall of the business. Houtman was immediately detained and handcuffed. Sergeant Jeffrey Richards and Officer Brandon Pacheco arrived and the scene was frozen until a search warrant could be secured.

While awaiting the issuance of the search warrant, business owner Brandon Estacio arrived on the scene claiming he was home watching video surveillance of the store when police entering his business. Estacio stated the shotgun hanging on the wall was in fact a BB gun that was given to him by a friend to use for protection. The colored safety tips were removed to give the appearance of being real.

Houtman, 32, of 827 County Street #2 New Bedford was arrested on charges of:
• Possession of Class D Substance with Intent to Distribute and
• Conspiracy to Violate Drug Laws.

According to Robinson, the business owner will be summoned to court on similar charges. 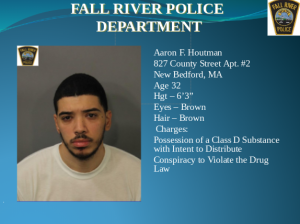