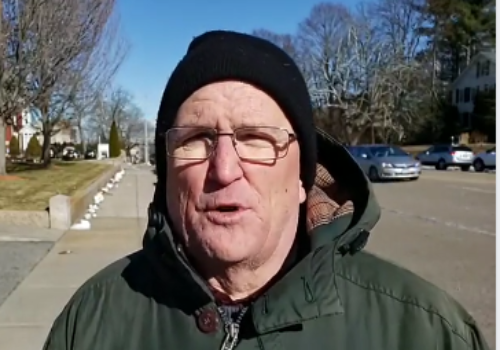 An individual from a New Jersey-based group was present today outside the administration offices of the Fall River Diocese to call on Bishop Edgar M. da Cunha, S.D.V., to release a list of priests accused of abuse of a minor.

A man is protesting outside the Fall River Diocese to demand a list of clergy accused of sexual abuse be released.

Last year, Bishop da Cunha announced his intention to publish a list of clergy against whom a credible allegation of abuse of a minor has been made in the past. According to a statement by the Fall River Diocese, da Cunha intends to produce a list despite the length of time that has past without one.

“As the Bishop previously announced, the Diocese engaged the services of an outside consultant to review personnel files of all priests, living or deceased. The Diocese’s preparation of the list of accused priests is ongoing. Bishop da Cunha appreciates the concerns of the individual who was present today and wishes to assure the community of faithful that the Diocese is taking the time and diligence necessary to compile a list that is accurate and thorough.”