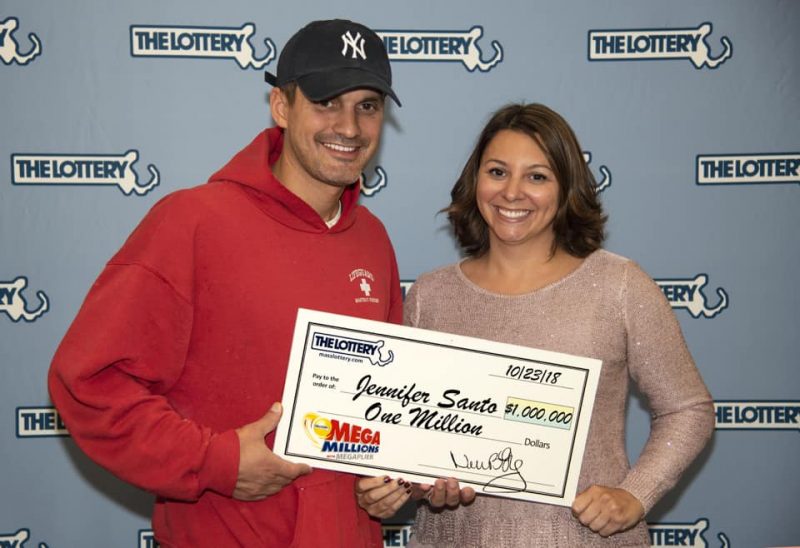 October 24, 2018 – According to Massachusetts State Lottery, Jennifer Santo of Dartmouth, MA is the winner of a $1 million Mega Millions prize after the first five numbers on her Quick Pic ticket matched the first five numbers drawn in the multi-state game’s Tuesday, October 23 drawing that featured a $1.537 billion jackpot won on a single ticket sold in South Carolina.

Santo, a nurse who recently turned 40, received a one-time payment of $1,000,000 (less tax withholdings). She purchased her winning ticket at Cumberland Farms, 33 Main St. in Bridgewater. The store will receive a $10,000 bonus for its sale of the ticket.

Santo, who was joined by her husband Manuel at Lottery headquarters to claim her prize, was especially grateful for her windfall after a recent unfortunate travel experience. The couple had booked a bucket list vacation in celebration of her milestone birthday, but learned at the airport that he would not be allowed to board their flight because the date of their departure was less than three months from the expiration date on his passport. This resulted in a non-refundable cancellation of their trip.

She plans to use a portion of her winnings to invest in the education of the couple’s two children.

A second $1 million prize won on a ticket sold in Massachusetts has yet to be claimed. That ticket was sold at Wilmington Nouria, 586 Main St. in Wilmington.