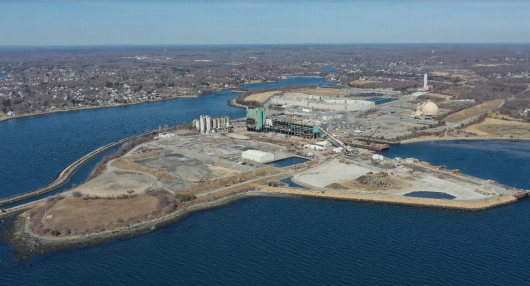 According to Commercial Development Company, Inc., the Brayton Point site’s transformation into an international marine terminal is becoming a reality as the site evolves towards becoming a sustainable logistics and manufacturing center, a renewable energy hub and an international seaport.

Russ Becker, President of EnviroAnalytics Group, reports “Demolition at Brayton Point has progressed to its final stages across most of the site. Grading activities will commence this spring to prepare laydown and manufacturing areas for future tenants. The grading plan is designed in accordance with the offshore wind industry requirements for a marshalling port and manufacturing of offshore wind components.”

“Our crews have safely deconstructed and removed 1.5 million square feet of former power plant infrastructure. We now have a blank canvas to create a platform for new development as the site matures into Brayton Point Commerce Center” said Becker.

CDC states that they have been engaged in extensive discussions with major offshore wind industry companies. Prospective tenants include manufacturing, logistics, cable interconnections, maintenance, and other bulk materials.

“The goal with our investment is to utilize attributes that made Brayton Point successful in the past, while supporting future energy needs, the local tax base and local employment,” said Stephen Collins, Executive Vice President at CDC. “We have seen significant interest from prospective tenants wishing to use the port for offshore wind operations. These discussions take time as the investments are sizable.”

According to the company, as of today, Brayton Point Commerce Center has received a total of nine vessel calls. These ships have included offshore wind research vessels, yacht transporters, bulk carriers and tug and barge units.

“Brayton Point is in competition with other ports and states up and down the east coast vying to serve the offshore wind industry. Our goal is to demonstrate that Brayton Point is a functional asset worthy of serious consideration. It is important we operate with support and cooperation of the community in order to attract wind industry investors,” said Neil McLaughlin, Co-Managing Director of Patriot Stevedoring + Logistics, LLC, the stevedoring company operating the site’s marine terminal.

In May 2019, Anbaric announced an agreement with CDC to establish a 1200- Megawatt (MW) high voltage direct current converter and 400-MW of battery storage at Brayton Point to support the offshore wind industry. CDC states that they continue to work with Anbaric, aiming to bring this plan to fruition.

“Ultimately, the development of wind energy projects at Brayton Point is subject to market factors outside of our control. These include state and federal permit timelines and developer contracts. However, we are preparing the site for wind uses and remain optimistic offshore wind will play a major role in Brayton Point’s future. Throughout southeastern Massachusetts from government officials to university and technical school leadership and business leaders interested in utilizing Brayton Point, there is a tremendous support and recognition as to what has been accomplished and where we are going. ‘Build it, and they will come,’” said Collins.

CDC has also announced that Patriot and Brayton Point Commerce Center have partnered with Clean Ocean Access to install a trash skimmer at Brayton Point.

Area residents, including the group “Save Our Bay Brayton Point”, have been concerned about possible pollution from the current activities at the site including multiple demolitions, several fires that have taken place in the past at the location, and piles of metal seen by residents being stored on site and shipped away by boat.

Many residents, have become skeptical of the site and want the current activities put to a stop. Despite the town stating that regulations are being followed, members of the group are not so sure.