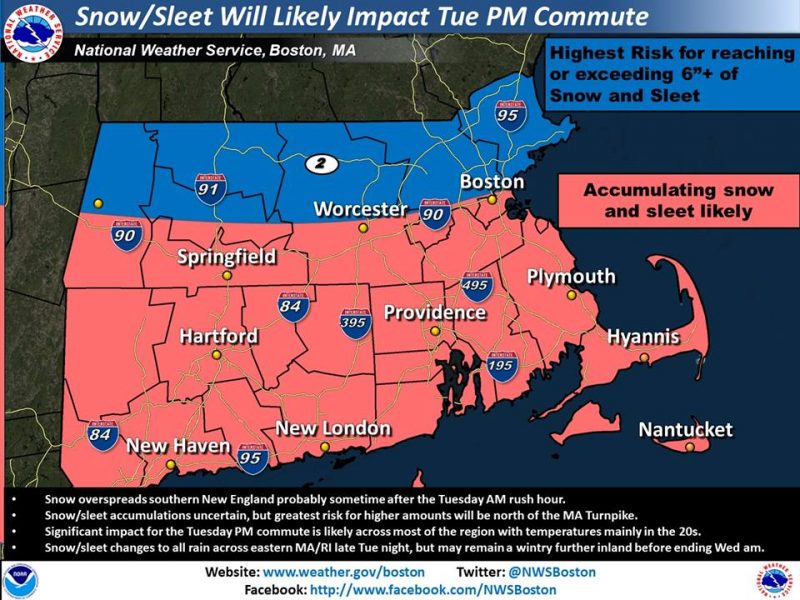 It is looking like we could have a messy commute early next week.

According to the National Weather Service, while potential accumulations of snow and/or sleet remain uncertain, a significant impact for the Tuesday afternoon and evening commute appears likely with temperatures in the 20s.

Snow is expected to spread over southern New England sometime after the Tuesday AM rush hour.

Greatest risk for higher amounts will be north of the MA turnpike.

Significant impact for the Tuesday PM commute is likely across most of the region with temperatures mainly in the 20s.

Here is the current storm forecast for our area:

Monday Night
A slight chance of snow after 3am. Partly cloudy, with a low around 17. North wind around 6 mph. Chance of precipitation is 20%.

Tuesday
Snow, mainly after 10am. High near 34. North wind 3 to 5 mph. Chance of precipitation is 90%. New snow accumulation of 4 to 8 inches possible.

Tuesday Night
Snow, freezing rain, and sleet before 1am, then rain and sleet between 1am and 2am, then rain likely after 2am. Low around 29. Light north wind. Chance of precipitation is 90%.