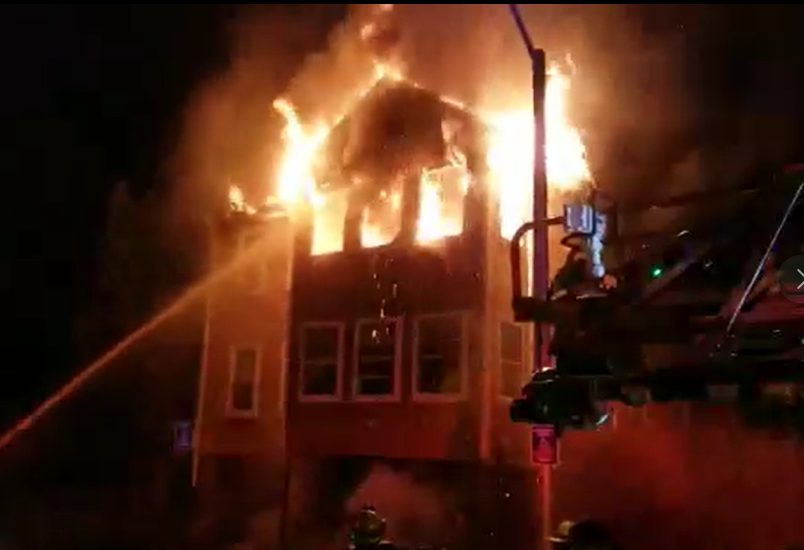 An elderly woman was rescued early Saturday morning from a 2-alarm fire.

Upon arrival, officers observed that the residence appeared to be fully engulfed in flames. Officers observed individuals in the rear common hallway screaming for help as smoke filled the hallway. The two men were struggling to assist an elderly female down the staircase from the second floor. Two officers entered the building, located the female in the stairway, and carried her to safety. She was treated by paramedics and was not seriously injured. The Worcester Fire Department took over the scene.

“I am grateful for the actions of two of our courageous police officers who rushed into a burning building to save a woman’s life,” said City Manager Edward Augustus. “This incident is a reminder to all of our citizens of the dangers of policing and another example of how our city is safer because of their bravery and commitment to their duty.”

“This is another example of the uncommon valor that the men and women of the Worcester Police Department carry with them each and every day on the job,” said Chief Steven Sargent. “We are all sworn to serve and protect and in this case it meant putting their lives on the line to save a woman’s life. I salute these two officers for their heroic actions, for without their selfless commitment and swift and courageous actions the outcome may have been tragic.”

According to the Red Cross, 3 adults were displaced in the blaze.