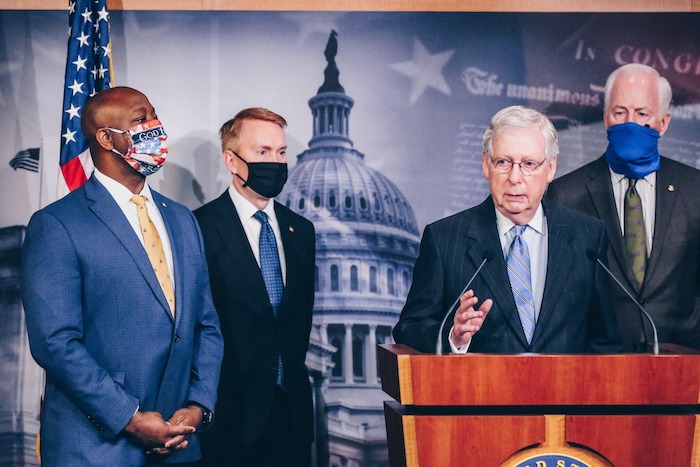 Saying the nation “has one foot in the pandemic and one foot in the recovery,” U.S. Senate Republicans unveiled a long-awaited relief package on Monday that proposes another round of stimulus checks, a scaled-back extension of unemployment benefits, and more than $100 billion aimed at bringing students back to school in the fall.

The roughly $1 trillion Republican proposal leaves untouched a range of elements Democrats included in a $3 trillion bill that cleared the House, foreshadowing the likelihood of a challenging negotiation process to decide what a final package will ultimately comprise.

One House-approved piece critical to the next few months on Beacon Hill is altogether absent from the Republican bill: more aid for state and local governments struggling with a collapse in tax collections.

“We have produced a tailored and targeted draft that will cut right to the heart of three distinct crises facing our country — getting kids back in school, getting workers back to work, and winning the healthcare fight against the virus,” he said.

The package is built on individual bills filed by various Republican committee leaders.

The legislation would extend the timeframe for governments to use $150 billion in the CARES Act and allows some of it to cover revenue shortfalls, but its approach is far more limited than the $500 billion additional support for states and $375 billion for cities and towns included in the HEROES Act the House approved in May.

Congressional leaders could still add in that federal support to the final legislative vehicle, but the uncertainty is lingering with state and municipal leaders who must balance their budgets despite massive tax revenue dropoffs — a process that could result in major cuts to the public sector.

In Massachusetts, the Baker administration and legislative leaders are eagerly awaiting a final answer from the federal government on whether they can rely on aid to help close a budget gap when they finalize an already-overdue annual spending plan, likely some time in the fall. House and Senate Democrats on Tuesday got behind a three-month budget to fund state government through October. Baker had offered a one-month budget.

With the U.S. economy months into a pandemic-prompted recession, the federal legislation proposes sending a second batch of direct aid checks to Americans. Similar to the first round, citizens and residents who earn up to $75,000 per year would be eligible for a $1,200 payment with an additional $500 per dependent, though the Republican proposal would also allow adult dependents to trigger the additional payment.

The legislation also calls for extending and reducing a pandemic-era expansion of jobless aid. Under the CARES Act, every person who qualified for either standard or expanded-eligibility benefits received an extra $600 per week, but that provision expires on Friday, July 31.

Republicans instead proposed paying an extra $200 per week to all recipients through September, then switching in October to a system in which state and federal aid combines to cover 70 percent of lost wages, according to a summary of that section of the bill.

“We’ll maintain some of the current boosted benefit, while responsibly honing programs to target help where it’s needed,” Senate Finance Committee Chair Sen. Chuck Grassley said in his prepared floor remarks. “This transition from a flat rate to a replacement of about 70 percent of lost wages is a better approach. Regardless, the boosted unemployment benefit is significantly more than the Democratic Senate and President approved in the 2009 economic crisis, and it doesn’t pay most people more than working like the extra $600 does.”

Other components of the proposal would create a new round of business supports building on the Paycheck Protection Program, incentivize domestic production of personal protective equipment, and outline plans for stockpiling key medical equipment.

The bill would allow those with student debt and no income to avoid paying in the short term, and it would also direct more than $100 billion toward an education fund aimed at helping schools reopen in the fall.

A key component sought by Republican leaders limits the liabilities that businesses, schools, churches and other entities could face if they are the site of COVID-19 exposure leading to personal injury.

Lawmakers will need to work quickly if they hope to reach a compromise on federal relief before a month-long recess scheduled for the U.S. Senate starting Aug. 10.

The Republican proposal quickly drew criticism from Democratic leaders, who flagged concerns with tying unemployment benefits to former wages and with the liability protections.