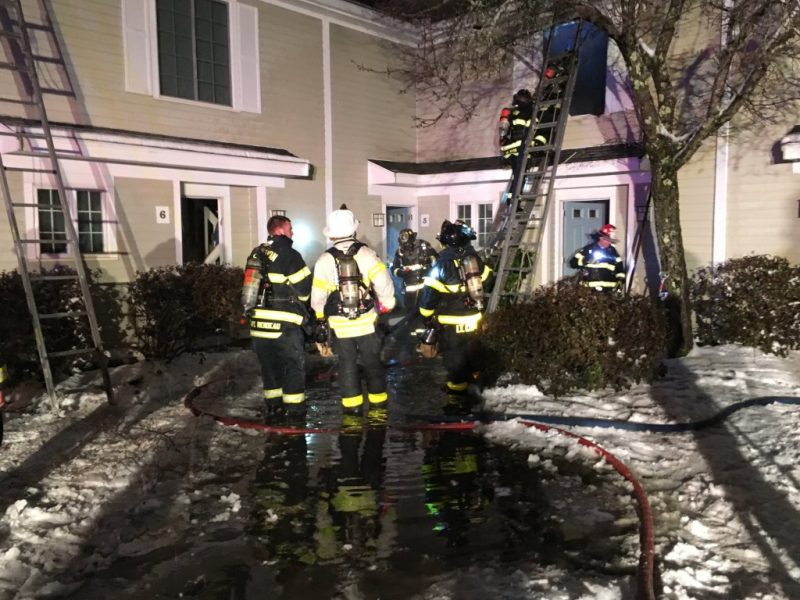 Chief Kevin Partridge reports that the Easton Fire Department extinguished a fire in the attic of a condominium complex early Monday morning.

At approximately 4:22 a.m., firefighters responded to 11 Nancy Road for a report of smoke showing in the attic of Unit 4.

Upon arrival, firefighters located heavy fire in the attic of units 4 and 5. All residents of the nine units in the building had made it out safely, along with their pets. No injuries were reported.

Firefighters had to use ladders to attack the fire from the rear of the building because a section of the roof had partially collapsed.

It took about an hour for the heavy flames to be fully knocked down. After checking for hot spots and doing overhaul, the scene was cleared at approximately 9:30 a.m.

The 12 residents of the nine units will be temporarily displaced while the building’s electricity and water service are shut off. Once the utilities are turned back on, most residents will be able to return home. However, two residents in units 4 and 5 will be displaced for a longer period of time due to fire, smoke and water damage in the units.

The initial investigation indicates that the fire had started in the attic and is not considered suspicious. The cause of the fire remains under investigation.

“I want to commend Captain Malone for his leadership in the initial response to this incident and for directing our mutual aid partners at the scene,” Chief Partridge said. “The strong work by our firefighters and our colleagues from other communities prevented this fire from spreading to the nearby units and avoided what could have been a far more serious fire.”