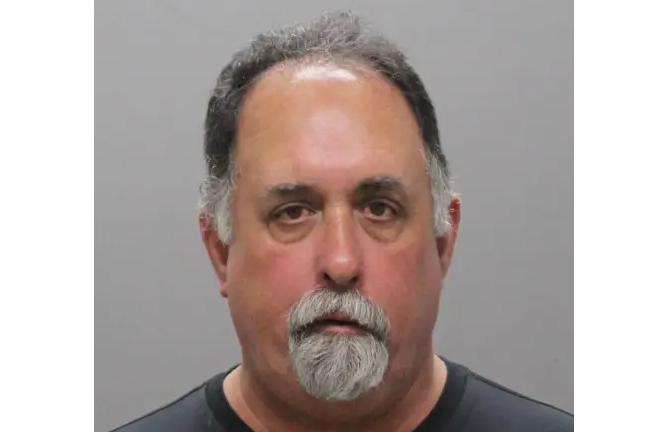 Amaral was arrested and charged with a hate crime after allegedly pistol-whipping a man on Thursday night, Dec. 3. (Photo courtesy Taunton Police Department)

Chief Edward J. Walsh reports that the Taunton Police Department arrested and charged a man with a hate crime after he allegedly pistol-whipped a Raynham man late Thursday night.

At approximately 10:15 p.m. Thursday, Dec. 3, Taunton Police were dispatched to a parking lot on Bay Street for a report of a person who was pistol-whipped.

The three men that called police met the officers in the parking lot and told the officers that one of them, a 23-year-old Raynham man, had been pistol-whipped by 59-year-old Joseph Amaral Jr. of Taunton a short time ago outside of Amaral’s North Avenue home.

The Raynham man was bleeding from his nose and had a bump on the side of his head. The man declined medical attention.

The victims told the officers that they were in a vehicle on North Avenue when the Raynham man exited the vehicle to go urinate on a nearby fence.

Amaral was screaming racial and derogatory remarks and obscenities at the Raynham man telling him to stay off of his yard.

Amaral struck the victim in the head twice with the pistol and then pushed the victim into the fence and kneed him.

After hearing the same story from each of the three men, officers went to Amaral’s home where Amaral answered the door and invited the officers inside.

While speaking with Amaral, officers observed a black pistol in plain sight on a kitchen counter that was similar to the one described by the victims.

Amaral, who appeared to be intoxicated and was slurring his words, was placed under arrest and the pistol was seized as evidence.

During a protective sweep of Amaral’s home, officers located and seized three rifles, two shotguns, a revolver and boxes of ammunition. Amaral’s license to carry a firearm was also seized and was sent to the state for review.

The TPD is aware of a video of the incident circulating on social media that refers to Amaral as “Taunton’s finest.” Amaral is not a member of the Taunton Police Department and is not believed to be a member of any law enforcement agency, according to police.

Amaral was charged with Assault and Battery with a Dangerous Weapon, Armed Assault and Battery to Intimidate Causing Bodily Injury, Intoxicated Licensee Carrying a Firearm, Civil Rights Violation, Threat to Commit a Crime, Vandalizing Property, and Improper Storage of a Firearm.

Amaral is expected to be arraigned today at Taunton District Court.

“This type of racism, bigotry and violence will not be accepted in our community and any acts of racism or violence will be aggressively investigated by our officers,” Chief Walsh said.