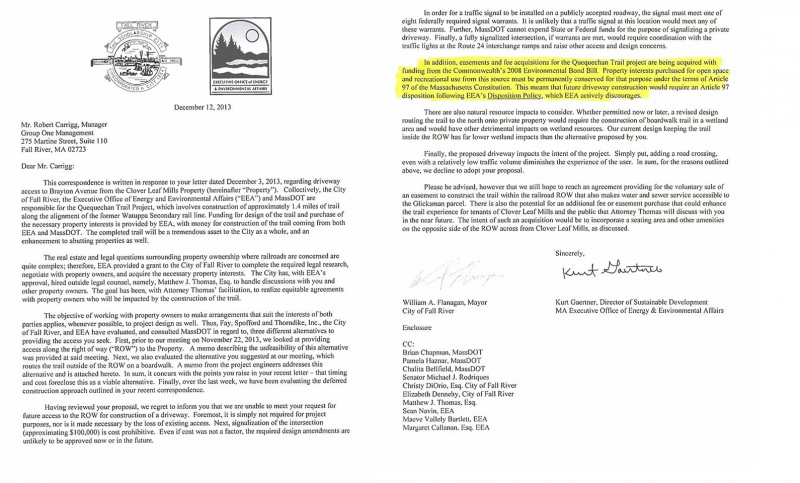 Bike Fall River acquired this letter that the Massachusetts State Executive Office of Energy and Environmental Affairs sent to the Clover Leaf Developers on December 12, 2013 . It appears, according to the document, that the State of Massachusetts was against the easement at the Quequechan Rail Trail. Despite that, it was passed by the City of Fall River.

The developer wanted a driveway from the their property to Brayton Avenue. Multiple alternatives were looked at by the State. The first  possibility was A Right of Way to the property. The State responded saying it was unfeasible.

The second alternative was Deferred Construction. The State of Massachusetts’ response was no.

Then the state said: ‘In addition, easements and fee acquisitions for the Quequechan Trail project are being acquired with funding from the Commonwealth’s 2008 Environmental Bond Bill. Property interests purchased for open space and recreational use from this source must be permanently conserved for that purpose under the terms of Article 97 of the Massachusetts Constitution. This means that future driveway construction would require an Article 97 disposition following EEA’s Disposition Policy, which EEA actively discourages.”

On Tuesday many members of the city council apologized for not understanding what they were adopting due to nothing being stated in the paperwork that it was for the Rail Trail. They also felt there was plenty of blame to go around.