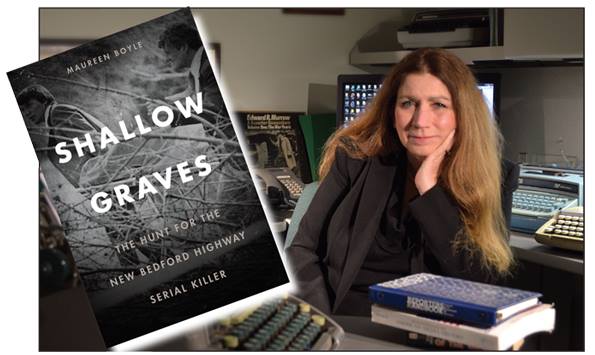 The Friends of the Fall River Public Library present an evening with Maureen Boyle, author of Shallow Graves: The Hunt for the New Bedford Highway Serial Killer, on Wednesday, April 11, 2018, at 7 p.m. In this true crime book, investigative reporter Boyle tells the story of a case that has haunted New England for thirty years–the worst serial killing case in Massachusetts since the Boston Strangler.

In the spring and summer of 1988, in the gritty seaside city of New Bedford, Massachusetts, eleven women went missing. Nine were later found murdered, their bodies dumped along Route 195, Route 140, and other highways in or around New Bedford. Several suspects were investigated, and the case was tied to serial killings in Portugal known as the “Lisbon Ripper” murders, but no one was ever convicted for the crimes, which remain unsolved.

Maureen Boyle, a crime reporter who worked at the New Bedford Standard-Times during the time of the killings, has written an “impeccably researched chronicle of a terrifying chapter in history,” says award-winning mystery author Hank Phillippi Ryan. She will discuss all aspects of this haunting case: the crimes, the victims, and the elusive hunt for justice.

Copies of Shallow Graves will be available for purchase at this event. Refreshments will be served.