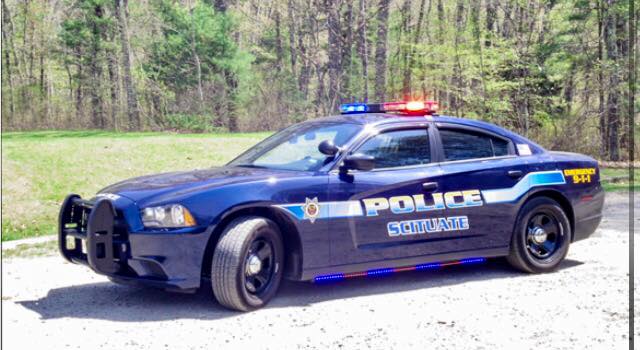 Scituate Police are still looking for a man who allegedly attempted to run an officer over with his vehicle.

According to Chief Donald Delaere Jr., on Friday September 21st at approximately 8:04 p.m., the Scituate Police Department were notified of a vehicle that had just fled from the Foster Police at a high rate of speed. An officer began to travel north on Route 116 to look for the vehicle.

The Scituate Officer located the vehicle in question and did a U-turn and activated his lights. Once the lights were turned on, the suspect increased his speed. As the suspect entered into the Route 116/14 intersection, the operator lost control and crashed into a sign and fence. The officer in turn parked behind the vehicle which is procedure for a felony car stop. The officer exited his vehicle with his gun drawn. The suspect at first was following commands, but suddenly placed his vehicle in reverse which according to Chief Delaere Jr, put the officer in fear of his safety. The suspect then placed the car in drive and drove directly at the officer. Fearing that he would be hit or run over by the vehicle, the officer fired his gun while narrowly avoiding getting hit by the vehicle.

The suspect continued driving until he hit another vehicle head on and making his vehicle undriveable. This caused the suspect to escape into a wooded area on foot.

Th suspect is still at large at this time. He is described as a black male, approximately 6 feet tall, wearing blue jeans and a yellow shirt with black stripes.

Rhode Island State Police are assisting in the investigation.