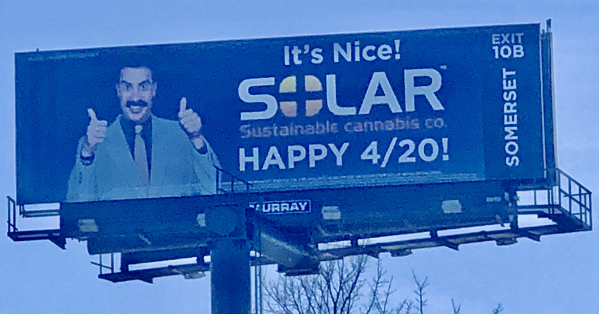 A famous comedian is dropping his lawsuit against a Somerset company for reportedly using his likeness without his permission.

According to WPRI, Sacha Baron Cohen has agreed to drop his lawsuit and cannot take further action against Solar Therapeutics on the matter.

Cohen was looking for an estimated $9 million in the lawsuit concerning a billboard allegedly posted by Solar Therapeutics showing his likeness as Borat.

The lawsuit initially stated that “this is an action for willful copyright infringement, false advertising, and violation of the Massachusetts statute against misappropriation of rights of publicity. Without permission of any kind, the Defendants deliberately featured the portrait, picture, image, likeness, and persona of Mr. Baron Cohen and his “Borat” movie character in a commercial billboard (the “Billboard”) on a busy interstate highway in Massachusetts, to advertise the sale of the Defendants’ cannabis products. The following is a photograph of the Billboard, which, upon information and belief, reached hundreds of thousands of viewers per day for several weeks.”

According to Cohen, he never endorsed the business.

“By use of the Billboard, the Defendants falsely have conveyed to the public that Mr. Baron Cohen has endorsed their products and is affiliated with their business. To the contrary, Mr. Baron Cohen never has used cannabis in his life. He never would participate in an advertising campaign for cannabis, for any amount of money. Mr. Baron Cohen never has been involved in advertising any commercial products or services anywhere in the United States or the United Kingdom, despite countless opportunities to do so.”

The billboard appeared on the highway from April 9 to April 27th. On April 24th, Cohen’s attorneys sent a cease-and-desist order.