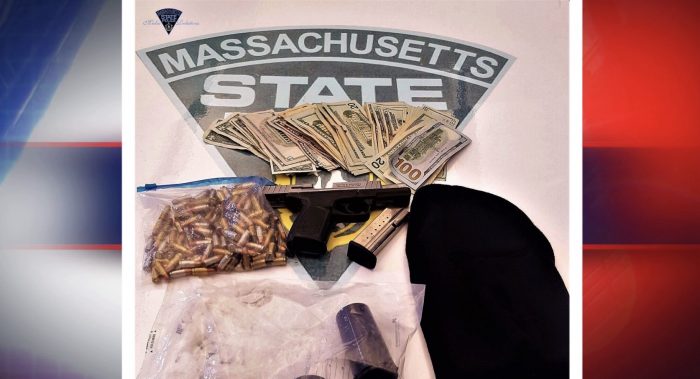 On the morning of November 21, Trooper Joseph Barteaux was patrolling Route 16 westbound in Chelsea when he observed a black Nissan Altima being operated in violation of motor vehicle laws and observed it almost strike another vehicle while abruptly changing lanes.

The vehicle, occupied by two brothers, pulled into a McDonald’s parking lot. Trooper Barteaux followed it into the lot and conducted a motor vehicle stop. Upon questioning, the driver, age 22, stated he and his brother were coming from his girlfriend’s house in Lynn and were returning to their home in Randolph. The driver, however, could not name the street his girlfriend lived on.

After making further observations of both men being uncooperative and appearing nervous, Trooper Barteaux asked both men to exit the car. The 24-year-old passenger walked with an apparent limp and dragged his right leg. When asked, he denied being injured. Based on the Trooper’s training and experience, he believed the passenger was concealing something in his clothing was walking strangely to hold it in place.

Trooper Barteaux then unscrewed the top of the cylinder the suspect had been concealing and observed inside it a large plastic bag containing a white rock substance believed to be crack cocaine.

Trooper Barteaux returned to the front driver side of the Altima and observed, in a compartment in the open front door, a black ski mask. The Trooper also noticed that a plastic panel behind the front right passenger seat was loose, exposing a void inside the seat. Knowing from his training and experience that a void like that is a common hiding place for illegal contraband, Trooper Barteaux reached into it and retrieved a plastic bag containing 116 nine-millimeter rounds of ammunition and a black and silver Smith & Wesson 9mm firearm. Trooper Maloney additionally located a large roll of duct tape.