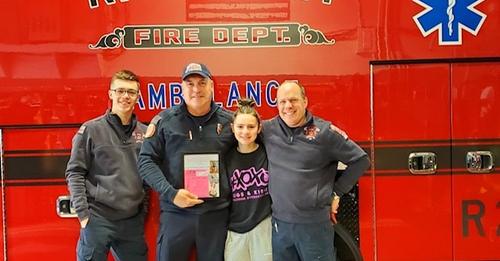 RAYNHAM — Chief Bryan LaCivita and the Raynham Fire Department are pleased to share the efforts of a 13-year-old resident to support Boston Children’s Hospital after she was treated there following a serious crash in her own driveway.

The fundraiser, Lily’s Operation Joy Drop, is hosted by 13-year-old Raynham resident Lily Moreira. All money raised will be used to purchase items from Boston Children’s Hospital’s Amazon wishlist, including movies, video games and more, which will directly benefit children undergoing treatment there.

Moreira spent 12 days in the hospital’s Intensive Care Unit after she was struck by a vehicle while in her driveway in Raynham on May 31, and Raynham Firefighters responded to the crash and provided care on-scene.

Moreira was partially run over by the vehicle. She was treated by medics at the scene and transported by medical helicopter to Children’s Hospital Boston with serious injuries. She is expected to survive.

An investigation indicated that Moreira was sunbathing in her driveway when a 41-year-old male relative pulled into the driveway, not realizing the child was there.

Members of the department have since remained in touch with Moreira and her family, and several members have donated to the fundraiser.

“I know how difficult and boring it can be to be in the hospital away from your family and friends. The days seem to go by much slower, I can attest to that,” Moreira said. “I am hoping that through this project I can bring a smile to the faces of those in the hospital and brighten their day.”

“We’re glad to be able to call attention to Lily’s efforts, which will directly support kids who are going through a difficult time while being admitted to the hospital,” Chief LaCivita said. “This fundraiser is a great cause, and I know all of our members are glad to see that Lily has not only recovered from her injuries, but is turning her experience into something so positive.”

Donations in any amount can be made via PayPal at maz3425@aol.com or Venmo at @Lily-Moreira, the last four digits of the phone number is 4701. Donations may also be made via check. Checks should be sent to:

The P.O. Box is being provided as a donation by the Veterans Brotherhood Bike Club. All who donate will be entered to win a sundae prize pack from Frankie & Dia’s.