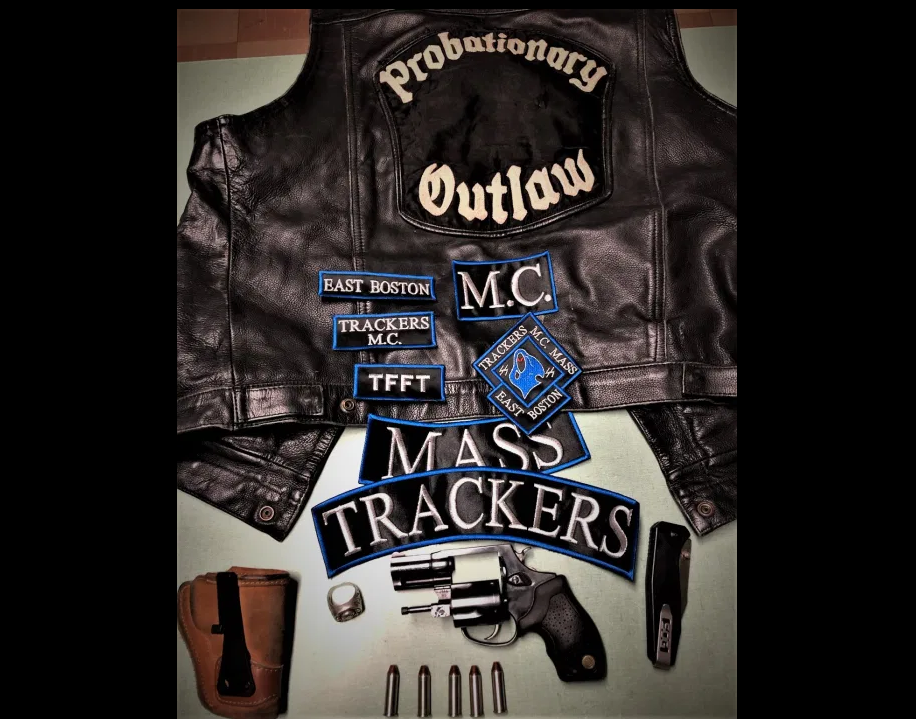 According to Dave Procopio of the Massachusetts State Police, shortly after 9 p.m. on May 1, Trooper Ryan Sceviour, assigned to State Police-Norwell, was patrolling Route 3 in Weymouth. At that time, he observed a black Cadillac sedan following another vehicle at an extremely close distance then abruptly change lanes and nearly strike his cruiser. Trooper Sceviour activated his cruiser’s emergency lights and initiated a motor vehicle stop.

Upon the Cadillac coming to a full stop, Trooper Sceviour approached the passenger side and identified the operator as Andrew Liberty, 30, of Marshfield. While speaking to Liberty, the Trooper observed a small bottle of partially-consumed alcohol, a syringe, and a leather vest with “Outlaw Motorcycle Club” insignia sitting on the passenger side floor. Trooper Sceviour gathered Liberty’s license and registration then returned to his cruiser to conduct an electronic RMV inquiry. The results of the inquiry revealed the license plates belonged on a Nissan, not a Cadillac.

Trooper Sceviour returned to the Cadillac and informed Liberty of the registration issue, then instructed him to step out of the vehicle as it was going to have to be towed from the scene. After Liberty stepped out, Trooper Sceviour observed a folding knife in his pocket. He then conducted a pat-frisk, removed the knife, and felt an object toward the center of Liberty’s belt line that he suspected to be a firearm. The Trooper lifted up Liberty’s shirt and observed the black handle of a revolver. Liberty immediately reached toward the firearm and a struggle ensued. Trooper Sceviour was able to utilize his training and overpowered Liberty, then escorted him to the ground where he continued to resist. He was eventually handcuffed, at which point he became compliant, and was then assisted to his feet. Trooper Sceviour located a loaded Taurus .38 special handgun; Liberty does not possess a license to carry firearms, according to police.

After a search of Liberty, Troopers located a small amount of a substance suspected to be heroin. Liberty was then transported to the Norwell Barracks for booking where a bail commissioner was contacted and released him on personal recognizance plus the $40 bail clerk fee. Liberty was scheduled for arraignment at Quincy District Court on the charges of Illegal Possession of a Firearm, Possession of Ammunition without FID Card, Carrying a Loaded Firearm, Resisting Arrest, Disorderly Conduct, Attaching Wrong License Plates, Unregistered Motor Vehicle, Possession of a Class A Drug, Open Container of Alcohol in Vehicle, and Marked Lanes Violation.