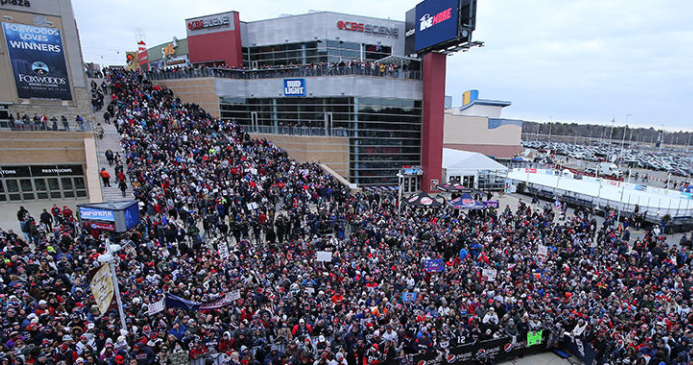 FOXBOROUGH, Mass. – Last Sunday, as Robert Kraft accepted the Lamar Hunt Trophy after an exhilarating come-from-behind victory in the AFC Championship Game, he complimented Patriots fans by saying, “I have never heard Gillette Stadium as loud as it was tonight.” On Monday, Jan. 29, fans will have one more chance to show their support and appreciation as the team hosts a Not Done Super Bowl LII Send-Off Rally on the NRG Plaza outside The Hall at Patriot Place presented by Raytheon.

Patriots in-stadium announcer John Rooke will kick things off at 9:00 a.m. The rally, which is free and open to the public, will include a performance by members of the New England Patriots Cheerleaders, T-shirt tosses and giveaways. Fans will also be entertained by the Greater Boston Firefighters Pipes and Drums and Foxborough’s own Thirty 6 Red before the program begins. Patriots Radio Network and 98.5 The Sports Hub play-by-play broadcaster Bob Socci and color analyst Scott Zolak will address the crowd with analysis of the Super Bowl LII matchup with the Philadelphia Eagles.

The rally will feature comments by Patriots Chairman and CEO Robert Kraft, Patriots Head Coach Bill Belichick, team captains Tom Brady, Devin McCourty, Matthew Slater, Duron Harmon and David Andrews, as well as wide receiver Danny Amendola. Buses are expected to depart Gillette Stadium at approximately 10:30 a.m. as the team travels to T.F. Green airport in Providence for their flight to Minneapolis. The team is scheduled to arrive in the Twin Cities at approximately 2:00 p.m. CT.

The Patriots captured their 10th conference championship and ninth since Robert Kraft purchased the team in 1994 with a 24-20 victory over the Jacksonville Jaguars on Jan. 21 at Gillette Stadium.

On Sunday, Feb. 4, the Patriots will compete for their sixth Super Bowl title when they face the Philadelphia Eagles. Super Bowl LII will be broadcast by NBC and can be seen locally on NBC Boston. Al Michaels will handle play-by-play duties with Cris Collinsworth as the color analyst. Michele Tafoya will report from the sidelines.
Related Topics:belichickcheerleaderfootballkraftnew englandPatriotstadiumsuper bowl