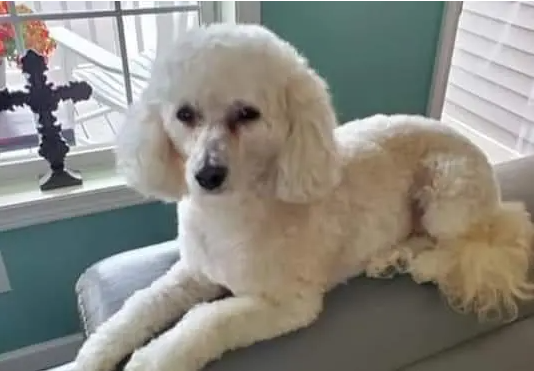 Gabby, a Maltipoo dog, was rescued by Raynham Police Officers following a coyote attack on Sunday, March 14. Gabby later succumbed to the wounds she sustained during the attack. (Photo courtesy Andrea Cox)

RAYNHAM — Chief James Donovan is pleased to share that Raynham Police Officers are being praised by the town’s Animal Control Officer and a family whose dog was attacked by a coyote for the officers’ quick and compassionate response.

Andrea Cox, daughter of the woman whose dog was attacked, sent a letter to the Raynham Police Department and Select Board commending the officers’ efforts when they responded to the incident earlier this month.

The incident was also shared by Animal Control Officer Linda Brackett at the Board of Selectmen meeting on Tuesday, March 23 during which both ACO Brackett and the Select Board commended the officers’ actions as well.

The incident occurred on Sunday, March 14. Raynham Police Sgt. Brian Levitre and Officers Robert Smith and Edward Reilly responded to the area of Pine Hills Estate and South Street East for a report of a coyote attacking a Maltipoo dog named Gabby.

Upon their arrival, officers searched for the dog that was found to have been dragged into the woods. Once located, officers quickly rushed Gabby to the veterinary’s office, in the passenger seat of the cruiser, where the beloved family pet was treated but ultimately died as a result of injuries sustained in the attack. The coyote was not located in the area.

The officers also provided information to the family in a compassionate and caring manner during the search for Gabby.

“What occurred was an extremely unfortunate incident where a family lost a beloved member of the household,” Chief Donovan said. “I would like to commend the actions of our responding officers who handled this situation with the utmost care and concern. Their actions on scene had a profound impact on the family, and for that I thank them. I would also like to thank ACO Brackett for her support of the family after the incident occurred.”

ACO Brackett would like to remind residents that during this time of year more animals, such as coyotes and foxes, are out during the daytime. Residents are encouraged to leave them alone and the animals will move on. If residents do find an unwanted wild animal on the property, bright lights and making loud noises will oftentimes get the animal to leave.

Added ACO Brackett, “While coyote attacks may not be common occurrences, they do happen and when they do they tend to go after small cats and dogs. We encourage our residents to be careful while outdoors with their pets and remain aware of their surroundings as coyotes can hide in small places and sit atop fences.”

The Raynham Police Department encourages residents with any questions or concerns regarding wildlife to call Animal Control at 508-294-6096.

Below is the letter in full from Andrea Cox:

A hospice nurse who works weekends, she was up early like every weekend, taking her 2 Maltipoos (Gabby & Willie) out to go the bathroom and starting her day. Just seconds after getting outside, Gabby barked once and in the blink of an eye was then dragged off by a coyote, pulled into the woods and mauled to death, just past my mom’s property tree line where she could hear Gabby’s screams for help as she was being killed, but she was unable to see her in the pitch dark and unable to get to her.

Absolutely hysterical, she called 911, in less than 3 minutes the Raynham Police were on site, my mother originally thought Gabby’s cries were coming from the next street over so that’s where the police headed, only to realize she was in the woods not 30 ft from my mothers house.

Without hesitation these officers ran into the woods, through the thorns and briar bushes and began searching for her, and there she was, her spine exposed, both lungs punctured, her throat ripped open and bleeding profusely, but still alive-

They ran back to my mother where they asked her to grab a blanket and then ran back into the woods, where with unbelievable kindness and respect for Gabby, they wrapped her broken body up and drove her and my mother in separate cars to the vet just down the road.

She still had a heartbeat, the vet said he had never seen a dog that badly mauled still breathing. Bleeding to death and with massive injuries there was nothing they could do for her and she died.

Heartbroken doesn’t even begin to explain our family’s pain. Three days later my mother is still completely inconsolable. All dogs are special, but to our family, this one especially so. Gabby was a gift from my father to my Mother who has since passed away from cancer. 50 years married, I had NEVER once seen them fight, I had never even seen them raise their voices to each other in anger, not one time.

Together since High School, their marriage was a love story you don’t see anymore. You see our Gabby Girl was that last little living piece of my father that my mother so lovingly and desperately held onto.

She was Willy’s life long companion and best friend. I still can’t believe this happened.

From the police, to the vet, and the Raynham Animal Control officer, Linda Brackett, who spent a half hour on the phone with me today answering every single little question I had, she never got frustrated with me, I wanted to let you know that my family could not be more grateful that during this awful time the Raynham police really went above and beyond the call of duty!!

To them, they were just doing their job, but to ME, my brother and my sister, they really stepped up, and stepped in to care for my mother like we would have had we been there. They treated my mother Donna with the utmost kindness and compassion.

And for that we are eternally grateful and can NOT thank you ALL enough!!