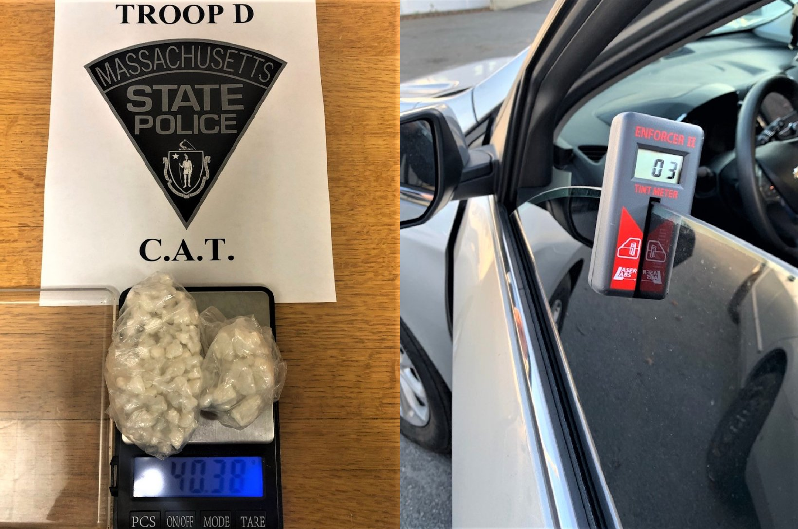 A vehicle with window tint that was reportedly too dark led to an arrest on drug trafficking charges in Fall River.

According to Massachusetts State Police, shortly before 10 p.m. on Tuesday, Trooper Brian Kilfoyle, assigned to the Troop D Community Action Team, was on patrol in Fall River. As he approached South Main Street he observed a silver Chevy SUV with extremely dark window tint. Trooper Kilfoyle activated his emergency lights and conducted a motor vehicle stop.

Upon the Chevy coming to a full stop, Trooper Kilfoyle approached it and identified the operator as Csean Skerritt, 33, of Boston. He informed Skerritt why he was stopped, then confirmed the transparency of the window tint with a reading of 3%. Additional Troopers arrived on scene to assist.

After conversing with Skerritt, Troopers observed several items in the vehicle which led to requesting permission to search it. Skerritt agreed and exited the vehicle. Trooper Kilfoyle quickly observed a black latex glove within the center console. Inside of the glove Trooper Kilfoyle observed multiple baggies containing substances suspected to be powder cocaine and crack cocaine. The total combined weight of the seized narcotics was over 40 grams.

Skerritt was placed under arrest and transported to the Dartmouth Barracks for booking. He was later transported to the Ash Street Jail to await his arraignment at Fall River District Court on the charges of Trafficking in Cocaine and Illegal Window Tint.