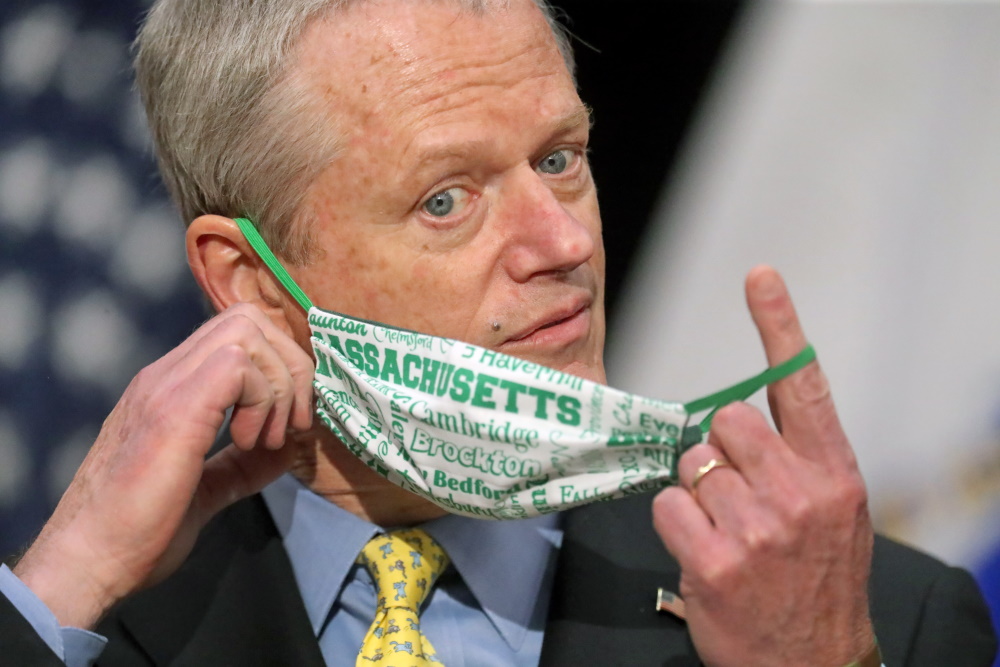 OCT. 26, 2021…..A day after Beacon Hill Democrats proposed $500 million in bonuses for low-income, essential workers who stayed on the job during the pandemic, Gov. Charlie Baker said he believes the idea is “the right thing to do.”

The premium pay program in the House’s $3.65 billion spending plan, which representatives will debate this week, goes well beyond the $40 million proposal Baker made aimed only at state workers.

And while the governor said he wants to see more details about the plan, which was released on Monday, he voiced support for it in broad strokes.

“While I hesitate until I see the fine print on most things to comment, I do think conceptually this is something that’s the right thing to do and we’ll do the best we can to implement it,” Baker said in a GBH News interview.

The plan, one feature in a package that allocates American Rescue Plan Act and surplus tax funds, would provide one-time bonus payments to workers who continued to work in-person during the COVID-19 state of emergency and who earned up to 300 percent of the federal poverty limit.

House leaders said that it would function similarly to the state’s COVID-19 sick leave program and that additional details would come in conversations with the administration.

Depending on how many people qualify, the checks would range between $500 and $2,000, House Ways and Means Committee Chair Rep. Aaron Michlewitz said while unveiling the proposal on Monday.

The House bill (H 3922) carves out $40 million from the $500 million program for state workers who continued to show up during the pandemic.

In August, Baker similarly proposed spending $40 million on premium pay for in-person, essential state employees as part of his surplus spending bill, and his comments Tuesday indicate the Republican governor is open to the $460 million proposed expansion that would be open to other low-income frontline workers.

“When we originally proposed what we proposed, I got asked about the essential worker piece, and I said I actually thought that was the kind of thing that would make sense to go through some sort of a public hearing process and for the Legislature to make a recommendation on that,” Baker said.

The premium pay proposal and a $500 million deposit into the state’s unemployment insurance trust fund are the only two pieces of the House bill to which Senate leaders have already agreed, leaving the bulk of the spending yet to be negotiated.

Senate Democrats plan to unveil their own proposal in the coming weeks for allocating a sizable chunk of the state’s remaining $4.8 billion in ARPA funds and the $1.5 billion tax surplus.

Leaders in both branches have said they hope to finalize a bill before Thanksgiving, but Michlewitz on Monday did not guarantee that the spending proposal would reach Baker’s desk before the Nov. 17 end of formal lawmaking business for the year.

Baker, who has been pushing for months for the Legislature to act on the once-in-a-generation pot of funding, said Tuesday that he hopes lawmakers meet the “urgency” of the moment.

“I get the fact that they wanted to have a deliberative process. That was why we only filed to spend about half of the money originally,” he said. “But I really do hope they come to an agreement and send us a pretty comprehensive proposal by the time they break because I don’t think we should wait another two or three or four months to get started on some of this stuff because some of it will take a while to do.”

Some other areas poised to receive new funding, such as workforce development and job training in the wake of massive unemployment spikes during the pandemic, need quick action, Baker added.

“The workforce training stuff, the skill-building stuff, the apprenticeship programs, rapid re-employment — those are things where we can start matching people who are looking for work with employers who are looking for people,” Baker said. “That’s important, especially since we still have places and spaces in Massachusetts that have really significant unemployment issues.”