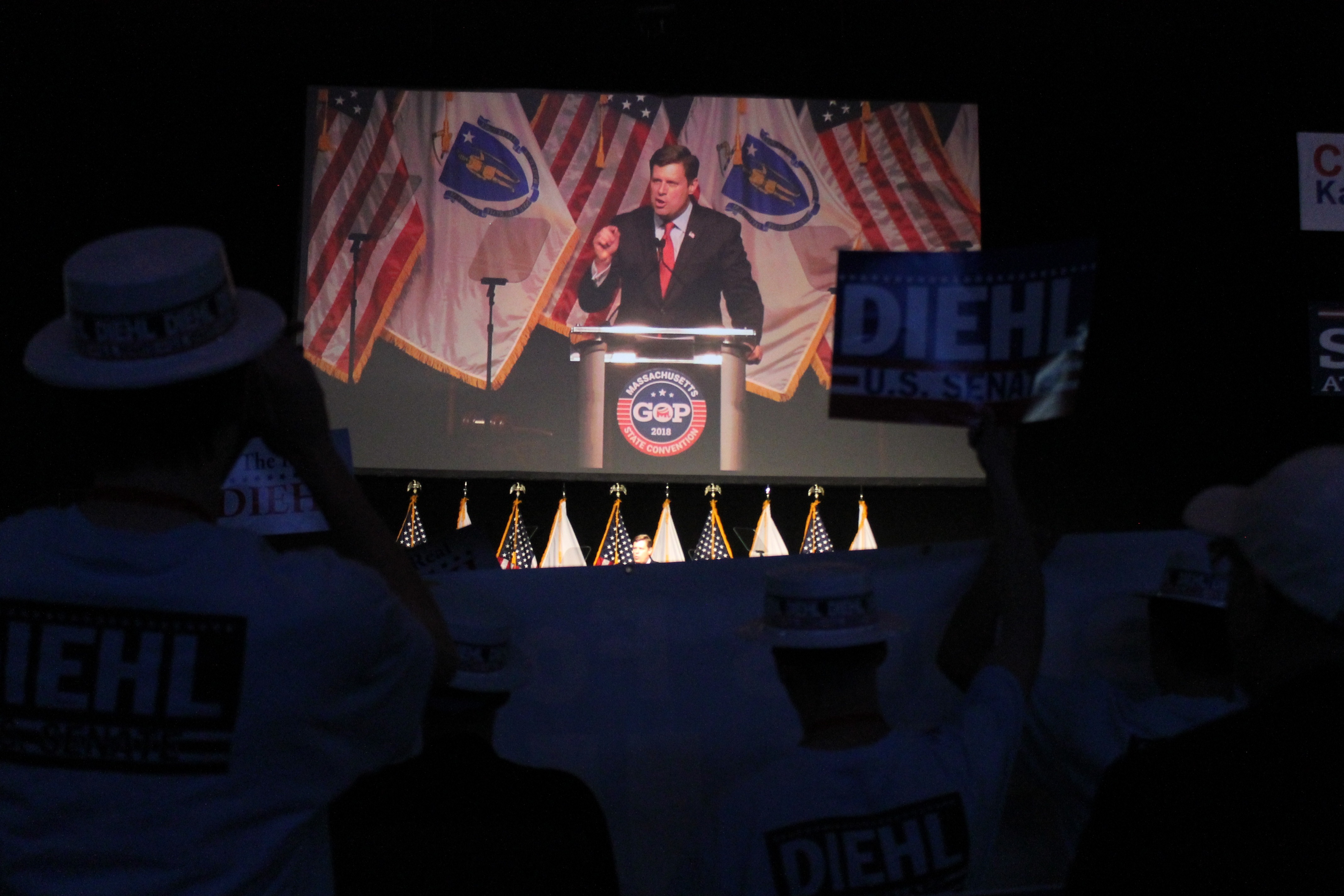 Geoff Diehl, then a candidate for U.S. Senate, spoke at the Republican state convention in 2018. [SHNS/File 2018]

APRIL 30, 2021…..Geoff Diehl, a former state representative and possible GOP candidate for governor, wants his party to make it easier to run as a Republican for statewide or federal office in 2022, pushing for a change to party convention rules that would reduce the amount of support needed to qualify for the ballot.

Diehl, who was the Republican nominee for U.S. Senate in 2018, presented the Republican State Committee with a resolution on Thursday night that would lower the threshold to qualify for the ballot at the convention from 15 percent to 10 percent of delegates.

“Like you, I want to make sure that the Republican party is recognized as inclusive, accessible and attractive for candidates and supporters who hold a range of views worthy of debate through the primary process. Lowering the threshold from previous years will insure (sic) consideration of a wider spectrum of ideas and demonstrate that we are not afraid of healthy competition as we promote our conservative ideals,” Diehl wrote in a email obtained by the News Service.

While the 15 percent rule is one employed by both major parties in Massachusetts and has been controversial at times for both Democrats and Republicans, Diehl’s push to lower the barrier to ballot access comes as he is weighing whether to run for governor next year.

Diehl said he believes he could offer something different from Baker if he runs and that his decision will not depend on whether the governor seeks a third term.

But the Whitman Republican said his proposed convention rule change was in response to rumors and reports that some in the party might be looking to make the 2022 MassGOP convention uncomfortable for Baker by raising the 15 percent threshold instead.

Baker remains very popular statewide, particularly with moderate Democrats and independents, but has shown weakness among Republican voters in recent polling as conservative activists have come to dominate the State Committee and could make up sizable sample of the delegates at next year’s convention.

“If there was ever a concern that the Republican Party was trying to close out Gov. Baker, I want to make sure there’s no perception that that’s the case,” Diehl told the News Service.

MassGOP Chairman Jim Lyons said the first he heard about a possible effort to increase the 15 percent threshold was when he read about it in a GBH News report. The report attributed the effort to conservatives on the State Committee aligned with Lyons.

Lyons said he “never had any interest” in raising the bar, and instead supports Diehl’s idea to make it easier for people to seek office as a Republican.

“I’m all for getting people involved in a Republican primary and the Republican Party and I definitely think this encourages people to participate in the process,” Lyons said.

The rule is intended to ensure that anyone seeking statewide or federal office has at least a small base of support and organization before being allowed to represent the Democratic or Republican Party in the primaries.

In just the past few cycles, the threshold has been used to disqualify candidates like Juliette Kayyem and Joseph Avellone on the Democratic side, and in 2018 Republican Mark Fisher successfully sued the MassGOP after missing the mark because he said the party wrongly counted blank ballots to make it harder for him to qualify against Baker.

Diehl said he “can’t imagine why anyone would oppose,” his proposal, but time will tell. “The idea is to try to remove any air of collusion,” Diehl said.

Baker has yet to announce a decision on whether he will seek a third term, but has recently suggested he feels like he has more work to do after a year spent dealing with the COVID-19 pandemic and the health and economic havoc it has wrought across the state.

Diehl said he’s not as far along in his decision making process as he was in 2017 when he decided to give up his House seat on Beacon Hill to run against U.S. Sen. Elizabeth Warren, but he said his next move will not depend on Baker or Lt. Gov. Karyn Polito.

“I don’t think what he does is going to affect my decision to run,” Diehl said. “It truly depends on family considerations. I have to make sure if I make this choice it works for me personally and that the people I’ve spoken with have given me good insight as to the support I can get.”

Diehl pointed out that despite both being Republicans he and Baker disagree on some policy issues, including Baker’s decision to help develop and enter a multi-state compact to reduce pollution from vehicles by putting a price on fuel emissions.

“I led the campaign against the indexed gas tax,” Diehl said, “So if I did run, I’m certainly clear that people would feel they have a clear choice. Why run if I would be a mirror of what he’s doing?”

Since losing to Warren, Diehl has gone to work as director of business development for 1A Auto, a Pepperell company founded by Republican and 2018 Congressional candidate Rick Green.

Diehl has also started a YouTube blog “Bay State with a Bronco,” for which he drives around to different parts of the state in his Ford Bronco talking with people about where they live and what they do. The last episode featured John Haran of New Bedford, who manages a sector for the Northeast Fishery.