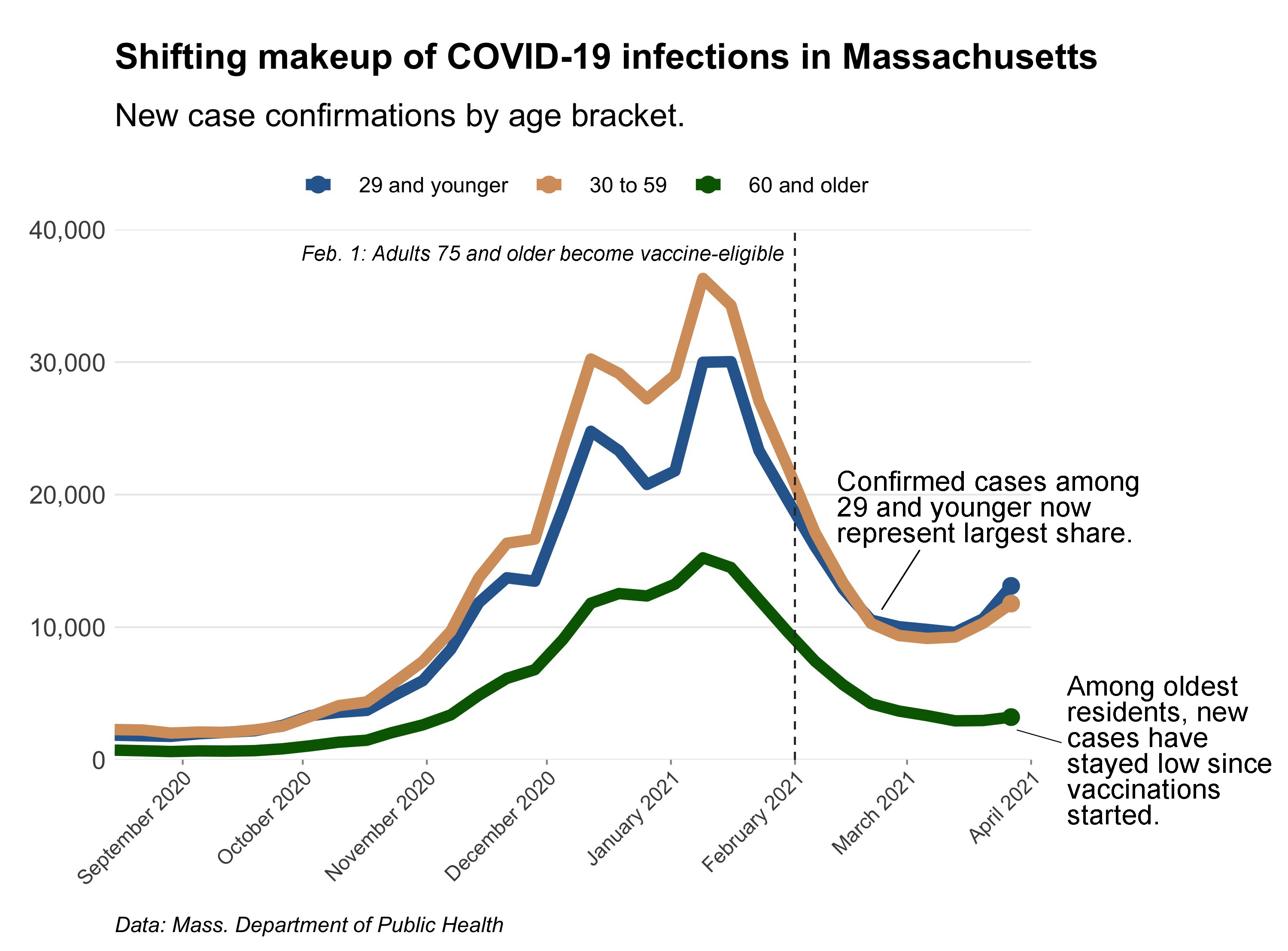 The rate of new hospitalizations for adults 60 and older has plummeted by nearly three-quarters since the start of 2021, while the portion of new cases among that age group was nearly cut in half over the same span.

Improving health metrics among older residents have been highlighted by Gov. Charlie Baker as evidence that the vaccine, after a sometimes rocky rollout, is working as intended, even as some experts warn that the burden on younger adults is growing with more infectious variants spreading.

Between Dec. 20 and Jan. 2, across the peak of the winter COVID-19 surge, the state counted 13,246 newly confirmed infections among adults 60 and older and 367 patients in that age range who were hospitalized with the disease.

At that time, the vaccine rollout was still in its infancy. Those 75 and older did not gain eligibility based on their age alone until Feb. 1, followed by those in the 65-to-74 range on Feb. 18.

The outlook for older adults is different today: in the most recent two-week batch of data ending March 27, the state counted 95 new hospitalizations among the 60-plus population, 74 percent less than in the two-week span ending Jan. 2.

Confirmed cases among those 60 and older represented nearly 21 percent of total infections in early January. By late March, its share was only about 11 percent.

Those trends are even more pronounced for the oldest residents in their 70s and 80s.

“If you just look at the data from January forward, the number of people over the age of 75 in Massachusetts who are testing positive has dropped like a rock and the number of people who have ended up in the hospital has also dropped like a rock,” Baker said on Tuesday. “That same period of time has been the period of time when, for the most part, we focused on those people who we were most concerned about, the most vulnerable and senior among us.”

The Bay State has been running above national averages for getting shots into the arms of its most senior inhabitants, the result of a deliberate rollout process that at times frustrated some who wanted the state to expand eligibility more rapidly.

Through March 30, the most recent date for which vaccination data by age is available, 82 percent of Massachusetts residents 75 and older had received at least one vaccine dose — roughly six percentage points higher than the national rate for the same population a full week later.

“Vaccines are the most effective tool that we have for preventing COVID, and I do think the fact that we’ve vaccinated older people is one of the reasons there’s been a decline in cases among older people,” Julia Raifman, a Boston University School of Public Health professor and researcher who studies the impact of policy on health disparities, told the News Service.

While the state has successfully reached many older adults who are particularly vulnerable, Raifman said white residents are about 1.5 times as likely as Black residents to be vaccinated and more than twice as likely as Hispanic residents.

“I am really happy that many have been vaccinated, especially older adults given that they’re vulnerable, and I’m also really sad to see the very large disparities by race and ethnicity in vaccinations across the country and here in Massachusetts,” Raifman said. “To really celebrate that we’re doing well in vaccinating people, we have to look at both of those outcomes.”

With older adults representing a falling share of the COVID-19 outlook, younger adults now make up a higher percentage of new cases and hospitalizations. It’s less clear, though, to what degree the virus might be spreading more rapidly in younger populations amid rising overall case totals in recent weeks.

The state for months consistently tracked more infections among those between the ages of 30 and 59 than in the cohort younger than 30, but that has been flipped since late February. For even longer, those 19 and younger have reported more new cases than any other decade-based age group.

“Across the country, we are hearing reports of clusters of cases associated with daycare centers and youth sports,” Walensky said. “Hospitals are seeing more and more younger adults — those in their 30s and 40s — admitted with severe disease. Data suggests this is all happening as we are seeing increasing prevalence of SARS-CoV-2 variants, with 52 jurisdictions now reporting cases of variants of concern.”

Last week, the state Department of Elementary and Secondary Education reported 801 confirmed COVID-19 cases among students and 244 among staff, the highest overall total in its weekly reports.

The Baker administration required K-5 elementary schools to bring students back to full-time in-person learning starting Monday, though it has granted several waivers to districts who want to extend their transitions out of fully remote or hybrid models.

Baker himself on numerous occasions has defended schools as safe locations where widespread transmission is not common.

Raifman said “one of the biggest surprises” of the pandemic is that there has not been more conclusive research about the role that children and school play in COVID-19 transmission.

“We do have good evidence that, so far, kids have been less likely than older people to test positive for COVID or to die,” Raifman said. “Certainly, some of those numbers could change with the new variants. I think there’s an urgent need still, a year in, to better understand transmission in schools.”