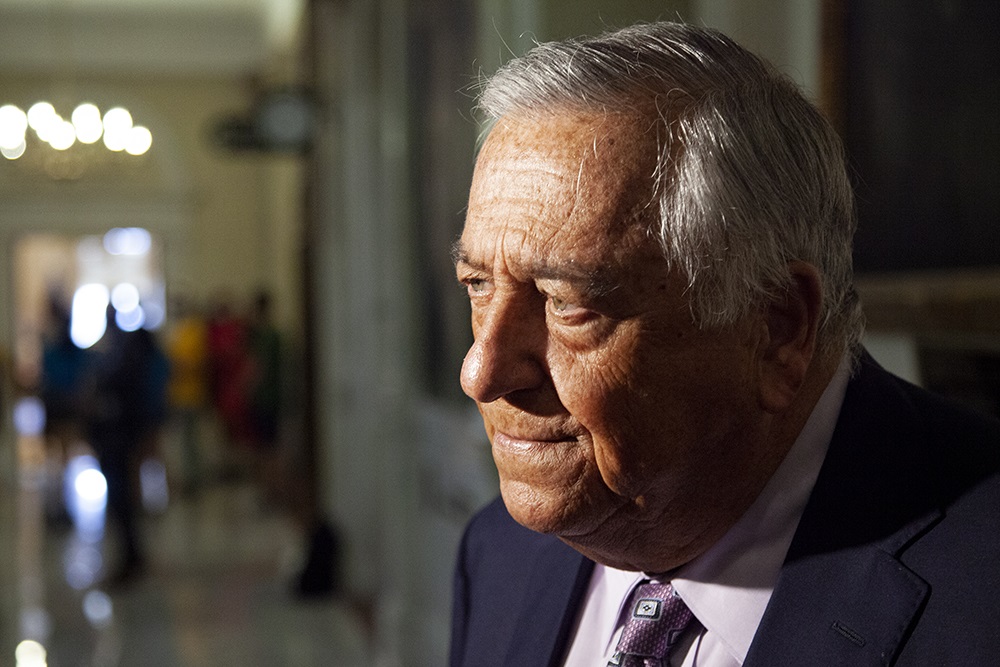 House Speaker Ron Mariano told reporters Friday that "everything's on the table" as Democrats rethink their tax relief plans with Massachusetts now appearing on track to trigger a decades-old law that could return nearly $3 billion to taxpayers. [Chris Lisinski/SHNS]

STATE HOUSE, BOSTON, JULY 29, 2022…..With Democrats heading into the weekend scrambling for a path forward on tax relief, House Speaker Ron Mariano said Friday that he is open to changing, delaying or spiking a 1986 voter law that appears poised to return nearly $3 billion to taxpayers.

This week’s revelation that Massachusetts is on track to trigger a decades-old provision requiring excess tax collections above a certain threshold to flow back to the taxpayers discombobulated plans on Beacon Hill, where Democrats face a weekend deadline to reach agreement on an economic development bill that features the tax package they spent months crafting.

Mariano said Friday that he would consider all courses of action, up to and including altogether scrapping the tax relief trigger law voters enacted in 1986.

“Sure, it’s an option,” Mariano told reporters when asked if lawmakers would consider undoing the trigger enshrined in Chapter 62F. “Everything’s on the table. We could undo the law, we could change it, we could postpone.”

He added,”I think it’s open up for discussion, and I’m not going to be the only decision-maker in that process,” Mariano said. “It has to go through the House, the Senate and it has to be voted on and signed by the governor.”

Executing any changes to that law could pose a challenge for Democrats, who at this late date in their formal session calendar would need Republican Gov. Charlie Baker to be on board with the idea.

Baker has indicated he wants the trigger to take effect, saying as he signed the fiscal year 2023 state budget Thursday that his administration anticipates “there’ll be a significant return to the taxpayers, according to existing state law, sometime later this year.”

The law, enacted in 1986 after 54 percent of voters endorsed a measure sponsored by Citizens for Limited Taxation, requires state government to return excess money to taxpayers if state revenues grow at a rate higher than the increase in wages and salaries.

A final calculation of the numbers would come from Auditor Suzanne Bump’s office by Sept. 20.

The last-minute emergence of the tax cap appears to have caught top Democrats off guard. Mariano on Friday described the trigger as a “one-time event” that “popped up.”

“We knew it existed, but we didn’t know how close we were,” Mariano said. “The formula is very convoluted. We’re not even sure if the numbers are accurate, and we won’t know until September how accurate the numbers are.”

Asked if the governor jumped the gun by announcing his administration’s projection for a nearly $3 billion return months before the auditor finalizes the report, Mariano replied, “You’ll have to ask him that. I don’t have an opinion on that.”

Any action to circumvent or block billions of dollars from heading back to taxpayers could generate election-year blowback for Democrats, particularly because the trigger was enacted by voters.

Less than half of incumbent lawmakers face any declared major-party opponent in either the Sept. 6 primary or the Nov. 8 general election. Both Mariano and Senate President Karen Spilka are unopposed.

The Massachusetts Fiscal Alliance called Friday afternoon for legislative leaders to leave the cap in place, describing it as “designed to protect taxpayers when situations exactly like this arise.”

“Speaker Mariano and Senate President Spilka should not alter or water down this law through deceptive last minute insider tactics to make sure they don’t lose control of taxpayer dollars. If they do, their integrity will be forever damaged and the Governor should use his veto without hesitation,” said MassFiscal spokesperson Paul Craney. “If the Speaker and Senate President did this at the last minute, they would be stealing money that didn’t belong to them, it would be tantamount to corruption. Taxpayers deserve this rebate and will certainly spend their hard-earned tax dollars better than the so called ‘budget experts’ on Beacon Hill who are so knowledgeable in their field that they didn’t even seem to be aware of the law.”

After a year of overflowing tax collections, Baker initially estimated the size of the pot as “north of $2.5 billion,” and the administration’s budget office said later Thursday it estimates $2.965 billion could be returned to taxpayers in a one-time event.

That would be several times larger than the tax relief package Baker unveiled in January and the corresponding proposal legislative Democrats spent months crafting.

The House and Senate each approved spending roughly $500 million on one-time $250 checks for middle-income earners and another $500 million in permanent tax breaks for renters, low-income earners, parents and seniors as well as changes to the estate tax. They wove those provisions into an economic development bill, which remains bottled up in conference committee negotiations and — because it features bond authorizations — requires a roll call vote before formal sessions end on Sunday, July 31.

Asked Thursday if the Chapter 62F returns were affordable, Baker replied by pointing to the record surges in statewide tax revenue, which increased 15 percent in FY2021 and another 20 percent in FY2022.

“We put gobs of money into our stabilization fund. I just signed a budget that’s got a 9 percent increase in it that we believe is absolutely affordable,” Baker said. “The permanent tax reductions that we proposed were around $700 million, which is reasonably consistent with where the Legislature’s proposals on the House and Senate have been. This thing is, as I said, north of $2.5 billion. There’s a lot of room there.”

But for Mariano, the idea of authorizing Legislature’s proposed tax package and also returning $3 billion under the trigger law poses “a big hurdle.”

“I don’t know,” Mariano replied when asked if state government could afford to do both. “We haven’t followed the numbers as closely as the governor has. We’re going to check it out, we’re going to look at it.”

The Quincy Democrat voiced uncertainty about the state’s fiscal outlook despite the record stretch of tax collections, describing Massachusetts as “in a bit of uncertain economic times.”

A massive outlay could “raise a concern as to what’s going to happen with future budgets,” Mariano said, particularly if lawmakers also implement a series of permanent tax cuts that would reduce future revenue.

“I know that’s something that’s really far more important to us than it is to the folks in the executive branch right now, but we do have to be mindful of the fact that we’re one of the highest-inflation states on the East Coast,” he said. “We do have to protect our future. It calls into question everything that’s on the table right now.”