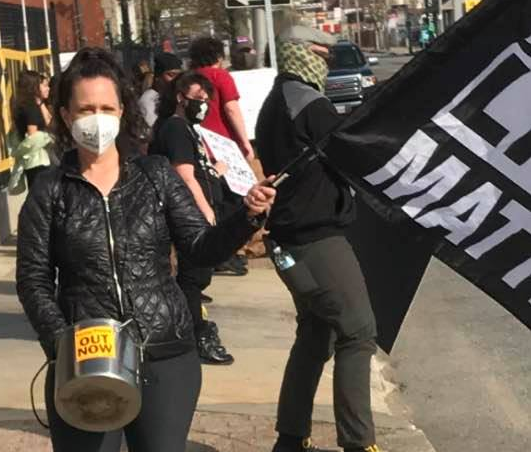 A protest was organized across from the Fall River Police Station on Saturday.

A group of 15-20 people showed up Saturday afternoon on the sidewalk on Pleasant Street protesting the social media post by an official with the Fall River Police Department that was later removed.

Heidi Hiland, who attended the event, stated that a particular organization was not behind the protest, just a group of people who came together.

“We are protesters that have rallied together many times at different events and some locals showed up thanks to social media. We quickly shared a flyer and were able to pull together to stand against this crap.”

A flyer distributed for the standout featured the phrases “Black lives will matter here” and “protect and serve not oppress & brutalize”.

During the protest the group chanted with a megaphone “if you align you must resign.”

Hiland says weekly protests are being planned until the official involved with the post is removed from the Fall River Police Department.

“Someone who thinks like that should not be running the streets with a badge and a gun. Someone with that power and that ideology is truly a danger to the community.”

Fall River Police Chief Jeffrey Cardoza has previously stated that the officer involved has been transferred to an assignment that has no contact with the public and that there is going to be an independent investigator from outside the agency assigned to the case.