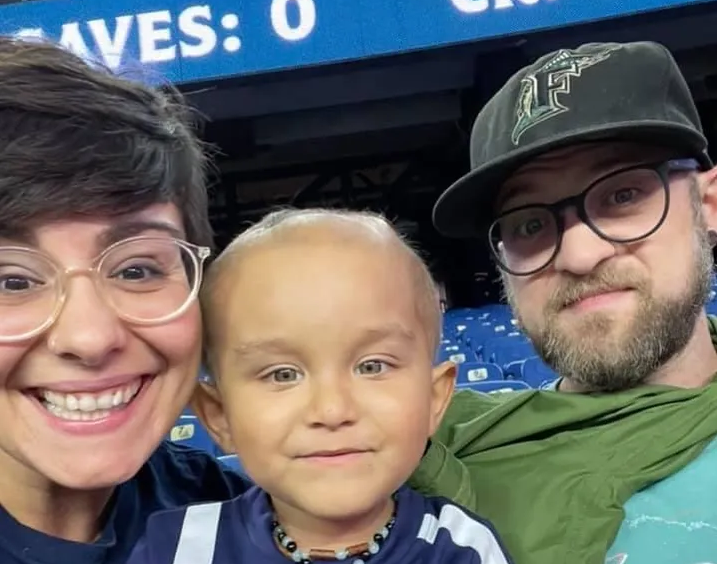 The community is coming together for Fall River natives and a couple who has adopted a sick boy with cancer.

On February, 21, 2019, Ryan Paradis, who is a 2004 Diman High Graduate, and 2005 Durfee grad Sharon Barbosa, received a phone call and learned of a baby’s premature birth and health conditions. According to friends, at the drop of a hat, Ryan and Sharon both agreed to do all they could to make sure that this baby Finn was safe and well taken care of.

Considering all he had been through in just a few months of life, Finn was doing well. Sharon and Ryan drove daily to Women and Infants Hospital to read to Finn, play music, snuggle him, and love him.

Finn came home on March 6th of 2019 with everything a newborn would need. He was involved in therapies, playgroups and met with every specialist needed to support his development.

In August of 2020, while an adoption was in the works, Sharon and Ryan noticed Finn had been a little off. Both Sharon and Ryan had visited the doctors multiple times, had taken various trips to the emergency room, and had him Covid tested numerous times. During each visit, they were told Finn just had a virus. When finally meeting with his pediatrician and insisting something was wrong, he was sent to see a neurologist to get a second opinion and a better look at his situation, and that is when everything changed so quickly.

On October 7 of 2020, Finn was brought to Hasbro Children’s Hospital and they ran several tests as well as an MRI, which led to the discovery of Finn having a large tumor in his 4th ventricle in his brain. Friends say that the very next day he underwent a 9-hour emergency surgery which removed most of the tumor. A week after they discovered the mass, Finn was diagnosed with Anaplastic Ependymoma, a rare and aggressive brain tumor.

On November 20 of 2020, Ryan and Sharon officially adopted Finn.

After being in the PICU for 2 1/2 weeks, Finn was then transferred to Spaulding Rehabilitation Center in Boston so he could relearn how to walk, speak, and swallow. During this time, cancer cells were discovered in his CSF, the fluid that flows in both your brain and spinal cord.

Some of Finn’s other medical problems from being premature have now been put on hold while he faces treatment upon treatment to fight his cancer. Despite everything, friends say that he still maintains his contagious smile and happy-go-lucky attitude while enjoying his dogs, dinosaurs, and superheroes.

Since his diagnosis in 2020 Finn has undergone 8 rounds of high dose chemotherapy, had 2 major brain surgeries totaling 21 hours, has spent in total over 3 months in the hospital due to side effects from the chemotherapy, and had an ommaya placed on his head so he can now get chemotherapy directly into his spinal fluid/brain. He continues daily maintenance chemotherapy at home and also weekly in-clinic visits, he gets physical therapy along with early intervention. When Finn is 3 in January and his brain is close to being fully developed, he will start his 6 weeks of the full brain and spine proton radiation at Mass General Hospital in Boston.

Despite everything, Finn is a thriving 2 1/2-year-old that continues to remind everyone that he meets what life is really about.

Now, this is where the community comes in.

A few of Ryan’s former classmates (Nicole Moniz of Westport and Louie Sisca IV of Fall River), had heard what he and his family were going through and decided to show some community support. Finn’s Fierce Fight is a fundraiser in hopes to help a young selfless couple who has taken in this sick, young, boy.

A raffle is also being held for $20 a ticket. Some of thee prizes include dinner for 2, surf lessons, $200 Electric Toothbrush, autographed Boston Bruins hockey stick a foursome round at Fall River Country Club.

Friends are also selling Finn t-shirts and have set up a GoFundMe.