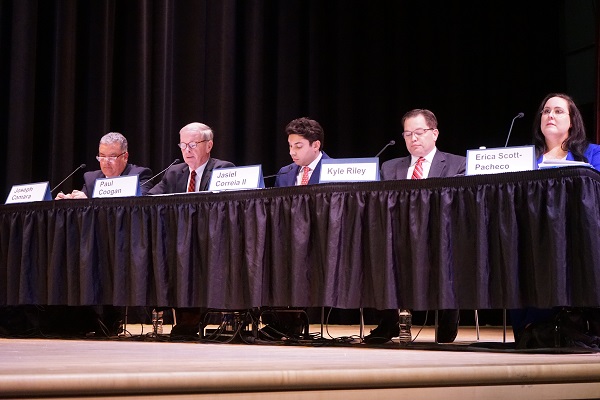 The four challengers who are seeking to supplant Mayor Jasiel Correia, the subject of the recall, raised questions about the incumbent mayor’s integrity while making the case for their respective candidacies.

Some common threads and themes emerged during two hours of the candidates answering questions from a panel of local journalists. Here are five takeaways:

Attacking the case might be a politically necessary, if risky, strategy given that it was Correia’s arrest last October on federal charges that triggered the movement to recall him from office.

But still, on only a few occasions did Correia even obliquely refer to the 13 federal criminal fraud charges he is facing that are related to allegations he scammed investors in his former smartphone app company, SnoOwl.

Correia, 26, said he could not help it that he was charged with breaking the law. Correia said he had been “accused of something in my youth that was not my fault.” The federal charges refer to an alleged fraud scheme that dates from January 2013 – when Correia was 20 – to May 2017, when he was already mayor.

In his opening statement, Correia, who was 23 when he was elected mayor in 2015, said he had “ruffled some feathers” in the city’s political class. Later in the debate, he claimed there were people “with agendas” on the City Council and in the community who don’t like him because they “didn’t get something from this administration.”

“Despite that, we have still moved the city forward,” Correia said.

Touting his administration’s move to scrap a $120 annual trash fee imposed by his predecessor as well as his announcement in late January that he was ending the unpopular Pay as You Throw Program, Correia repeatedly claimed to be the only mayor in Massachusetts who had cut fees while increasing municipal services.

“If you don’t want another fee, vote for me,” said Correia, who added that this administration is looking at ending more fees, including the city’s stormwater fee.

Correia also cast himself as a mayor who had steered the city from the brink of receivership to one poised for an explosion of new economic development. At one point he held a stack of papers that he said was a list of small businesses that had opened in Fall River in the previous six months.

The mayor mentioned a list of other developments on his watch, from the approval of the new B.M.C. Durfee High School to fully funding the city’s public schools, as evidence that he has been a good mayor.

“It’s undeniable that the city has moved forward,” Correia said.

Correia’s challengers are not letting him off the hook

The candidates on the stage at Morton Middle School who were not named Jasiel Correia hammered the mayor for casting “a dark cloud” over Fall River that they said has people on the outside looking in and shaking their heads.

“I cannot sit idly by as Fall River’s image is tarnished on a national stage,” said City Councilor Joseph Camara, who argued that Correia has lost his ability to lead.

“It’s time we bring honesty and integrity back to Government Center,” Camara said, adding that the federal charges against the mayor are serious and mean he has a long road ahead of him.

Also saying that the mayor has an “uncertain future,” Camara alluded to the possibility that Correia, if he pleads guilty or is convicted at trial, could serve time in federal prison: “I don’t know where he’s going to be shortly, but I know where we’re going to be.”

School Committee Member Paul Coogan said Correia should step down, fight to clear his name and return to local politics after his legal battles are finished.

“Dark clouds are swirling over him and our city,” said Coogan, who added that the weight of the evidence against Correia “is over the top, especially for someone leading the City of Fall River.”

Adding that a leader sets the tone of any organization, Coogan also criticized Correia for “turning politics on their head” in Fall River by engaging in petty behavior, such as creating a website to troll a Herald News reporter and refusing to renew the constable license of a city resident who reportedly supported the recall.

“My position is our leader is a young man who doesn’t understand how you build teams,” Coogan said.

With the uncertainty hovering over Correia, Riley said it feels as if the indictments are hanging over everybody’s heads. Riley said people from outside Fall River are constantly asking him about the indicted mayor and whether he’s already in jail.

Meanwhile, Erica Scott-Pacheco, a political newcomer running in her first race for office, was just as aggressive in going after Correia for his pending criminal case and mayoral record. Referencing his announcement to end PAYT, Scott-Pacheco accused Correia of pulling a trump card “at the 11th hour” to get city residents to vote for him.

“There is no single issue that Jasiel Correia has politicized more than trash,” said Scott-Pacheco, who vowed that she would fire Correia’s legal and finance team – Joe Macy, Mary Sahady and Cathy Ann Viveiros – within the first month of her becoming mayor.

Amid the sniping at Correia and the incumbent mayor defending himself, the candidates answered questions pertaining to education and public safety. As you would expect, the candidates want good schools and safe streets, though they differ a bit on how to get there.

Regarding public safety, Riley said he wants to add 50 police officers to the Fall River Police Department. Camara said the key to safer neighborhoods is more cops on the street. Coogan floated the idea of adding more cameras in public places and blue light emergency boxes in the city’s larger parks so people can walk and feel safe. Scott-Pacheco vowed to eliminate a position of special assistant to the mayor to free up funds while adding that she would rely on a neighborhood coordinator to work with the city’s neighborhood associations to address their concerns. Correia vowed to increase the police department’s overtime budget and have 12 cruisers on during patrol shifts.

On education, Correia said his administration has cut class sizes by increasing school funding while Coogan, a longtime educator in Fall River, chided the mayor, in his role as the School Committee chairman, for missing committee meetings and leaving meetings early. Riley emphasized his background as a school principal. In response to a question about improving student attendance, Scott-Pacheco said she wanted to offer universal breakfast and lunch in the schools. Camara said he would like to see a shelter at every school bus stop in Fall River.

Also, given the political reality, it should be no surprise that none of the candidates say they are in favor of bringing back the purple trash bags.

When you’re running against multiple candidates for one office, differentiating yourself from the rest of the field is vital to have any chance of winning.

Correia cast himself as the successful mayor with a strong job performance who still has more to accomplish.

“I have not ever betrayed the trust of the residents of Fall River,” Correia said.

Coogan sought to come across as an affable and capable leader who is respected in the community after a long career in education and can return “experience and accountability” back to the mayor’s office.

“Gone will be the days of pay-to-play and revenge politics,” Coogan said.

Riley said the mayor has to be a symbol of integrity and stability for Fall River, added that he has been a collaborative leader in his career and said he has built trust and goodwill through decades of coaching youth sports and being involved in the city.

“This community means everything for me,” Riley said.

Camara emphasized his 23 years on the City Council to make the case that he has the experience, knowledge, and skills necessary to be mayor.

Scott-Pacheco presented herself as a political outsider who lives in the Flint and is running without political connections. She said she was the most fiscally-conservative candidate who would bring transparency to city government while fighting for the city’s disadvantaged residents.

“Our city, our Fall River, is not broken. What is broken is the system. For far too long we keep having a revolving cast of the same characters, expecting different results,” said Scott-Pacheco, who at one point claimed to be the only candidate with a full-time job in the private sector. That prompted Camara to interject that he has a full-time job at ABC Building Supply Company in Fall River and has had it for the past 12 years.

The full debate can be viewed here: