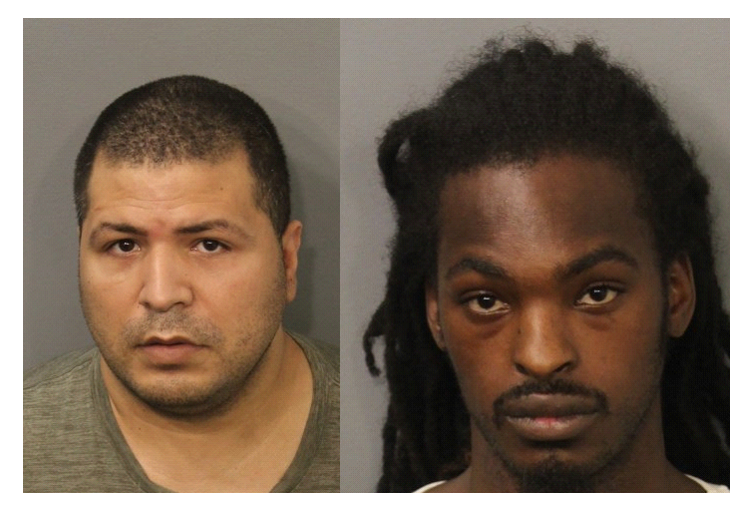 According to Detective John Robinson, on Wednesday, July 18th at approximately 10:05 a.m., Detectives of Fall River Police Departments Vice and Intelligence Units executed a Search Warrant at 1166 South Main Street in Fall River. The target of the warrant was Hector Martinez, 35, of apartment 2. The lead detective was Tryce Garrant. Assisting were Detectives Luis Duarte, Richard Aguiar, Nicholas Magan, Joshua Robillard, Athan Parousis, James Elumba, and Detective Sergeant Gregory Wiley. Upon entering the entry, Detectives knocked on the door and announced their presence. After several moments and no response from the occupant, the door was breached and entry was made. With intelligence from a previously executed search warrant on the same apartment in May, Detectives made their way to the back bedroom where they located the target, Hector Martinez, just getting out of his bed. Martinez was secured and a search commenced. Detective Aguiar located a clear plastic bag containing multiple blue glassine bags of suspected heroin. The heroin was taped behind a poster in the rear bedroom. Detective Robillard located a digital scale in the same room. In total 42 doses of suspected Heroin were seized. Martinez was taken into custody on a charge of Possession to Distribute a Class A substance.

On Thursday, July 19th at approximately 07:30 a.m., Detectives of Fall River Police Departments Vice and Intelligence Units executed a ‘No Knock’ Search Warrant at 101 Healy Street in Fall River. The target of the warrant was Matthew Byrd, 28, of apartment 3. The lead detective was Richard Aguiar. Assisting were Detectives Luis Duarte, Tryce Garrant, Nicholas Magan, Athan Parousis, and Detective Sergeants Gregory Wiley and Andrew Joseph. On arrival to the apartment, both front and rear doors were breached simultaneously by FRPD. Byrd was located in the back bedroom near the rear door. The warrant was read to Byrd and he agreed to show detectives where the drugs were hidden. Byrd pointed out a wooden box mounted on a wall. Detective Duarte opened the box and located a plastic bag that contained numerous smaller bags. Some of the bags contained a white hard rocky substance suspected to be crack cocaine while others contained a tan powdery substance suspected to be heroin.
A further search commenced with Detectives finding a digital scale and floor safe which contained a large sum of cash and more suspected crack and heroin. In all, over 12 grams of heroin and almost 15 grams of crack cocaine were seized. Byrd was taken into custody on charges of Possession to Distribute a Class A Substance and Possession to Distribute a Class B Substance.