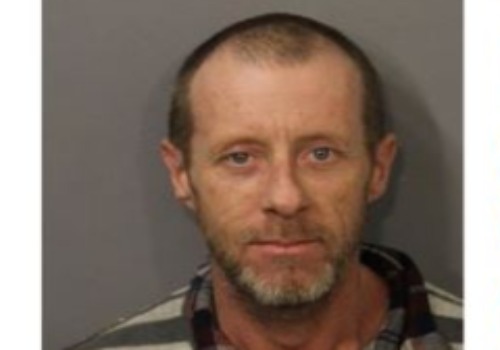 A car break-in call has led to an arrest by Fall River Police.

According to FRPD, on Wednesday, January 8, 2020 at approximately 2:00 a.m., Officers Matt Gauvin, Rachel Silvia and Ronnie Dudney responded to the area of 649 Alden Street for a report of someone breaking into vehicles. A description was given of the suspect and that a distinct “red light” was being used to illuminate under vehicles. Further details were provided that this person was seen crouched down with the red light using it to look under vehicles. Officer Dudney located a suspect matching the description who was found to have an illuminated red light partially stuck inside of his pocket. Further investigation revealed a nearby vehicle was elevated by a use of a scissor jack and there was numerous footprints in the fresh snow around vehicles nearby. After speaking with a witness, it was determined that Jason Rich, 46, was the suspect and had been seen walking around the vehicle that was jacked.

Officers noted that Rich was extremely nervous when interacting with police. According to police, Rich also did not give a good reason for being in the area. Rich’s clothing also was wet which was consistent with being on the ground for an extended period of time.

Rich was subsequently arrested and charged with Attempt to Commit a Crime and Possession of Burglarious Tools.