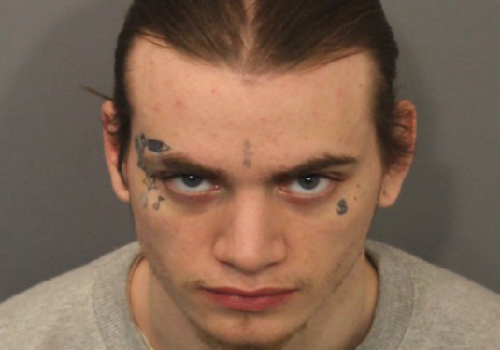 A 24-year-old Fall River man who caused a fatal crash in the city while fleeing from police in March of 2017 was sentenced to serve eight to 12 years in state prison last week in Fall River Superior Court, Bristol County District Attorney Thomas M. Quinn III announced.

Aaron Affonso pleaded guilty to indictments charging him with motor vehicle manslaughter, leaving the scene—death resulting, leaving the scene of personal injury, failure to stop for police and driving with a suspended license.

On March 30, 2017, at approximately 10:43 am, Fall River Police received a call from a concerned citizen about a suspicious vehicle parked in her driveway. The caller told police four people got out of the vehicle and jumped the wall into the next yard.

The vehicle was not there upon officers’ arrival, but they were able to put out a description of the vehicle. A vice detective responded that he had the vehicle in sight as it had almost hit his cruiser, and run a stop sign at Buffinton and Coggeshall Streets. An officer in a marked cruiser caught up and attempted to stop the vehicle on Globe Street. The officer’s emergency lights and siren were activated and when he sounded the air horn, the two female rear seat passengers turned around and looked at the officer. The vehicle then swiftly accelerated and fled at a high rate of speed. The officer did not pursue, informed dispatch, shut off his lights and siren and pulled over on Globe Street.

The vehicle then crashed head-on into a Dodge mini-van operated by William Solitro, 69, Middletown, RI, who later died from injuries sustained in the crash.

After the crash, the defendant fled to a friend’s house on Vale Street. Officer Thomas Faris received information that the defendant went into 298 Vale Street and followed what appeared to be fresh wet blood droplets from the sidewalk, through the common area to an apartment on the second floor. The defendant was located laying on the floor of the bathroom with blood on his face, hands, and left leg.

During a sentencing hearing before Judge Raffi Yessayan, Assistant District Attorney Michael Cahillane argued that based on the defendant’s criminal record and the egregious facts of this case, the defendant should be sentenced to a 12 to 18 year state prison sentence. The defense, however, requested a more lenient five to seven year state prison term.

In addition to the eight to 12 year state prison sentence imposed, Judge Yessayan also placed the defendant on probation for an additional two years during which time the defendant is prohibited from operating a motor vehicle.

“This is a tragic case that occurred due to the defendant’s wanton and reckless operation of a motor vehicle in broad daylight. I hope the defendant understands the irreparable harm he has caused to the victim and his family, as stated by the victim’s daughter during her impact statement to the court,” District Attorney Quinn said.