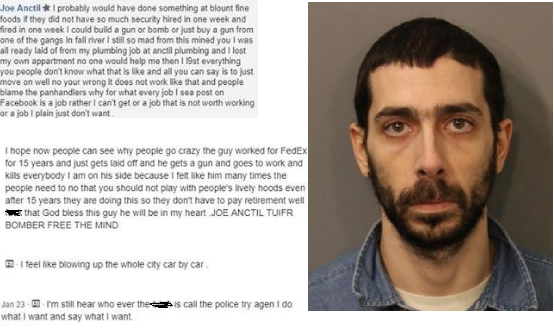 A 31-year-old Fall River man who stalked and threatened a job recruiter who was attempting to help him find gainful employment and also threatened to shoot up or bomb his former employer was sentenced to serve time in the House of Corrections recently, Bristol County District Attorney Thomas M. Quinn III announced.

The defendant was a client of Fall River temporary employment agency, American Labor Services (ALS). Early this year, the defendant was laid off from a job at Blount Seafood that ALS had placed him at in 2018. The defendant threatened to strangle the ALS recruiter after learning of his lay-off, despite the fact that she told him she would continue to work on his behalf to find him new employment. He then went to ALS and pounded on the door and yelled at the victim. He also called ALS numerous times, spoke to the victim, and threatened her with physical and sexual violence. The defendant also threatened Blount Seafood that he would get a gun or build a bomb, and posted on social media that he was going to “blow up the city car-by-car.”

The defendant was arrested by Fall River Police, admitted to the threats and stated that a recent workplace shooting at FedEx inspired him to make the threats.

Judge Thomas McGuire sentenced the defendant to two-and-a-half years in the house of correction, with 18 months to serve. The balance of the sentence was suspended for three years. The defendant was also placed on supervised probation for three years with the conditions that he wear a GPS Monitoring with exclusion zones, stay away from ALS, Blount Seafood and the job recruiter victim. The defendant also must undergo a mental health evaluation and abide by any recommended aftercare.

The case was prosecuted by Assistant District Attorney Matthew Friedel.

“This is the type of threatening and menacing behavior that we see all too often in today’s society. It must be taken seriously. The victim was consulted and satisfied with the disposition of the case,” District Attorney Quinn said.