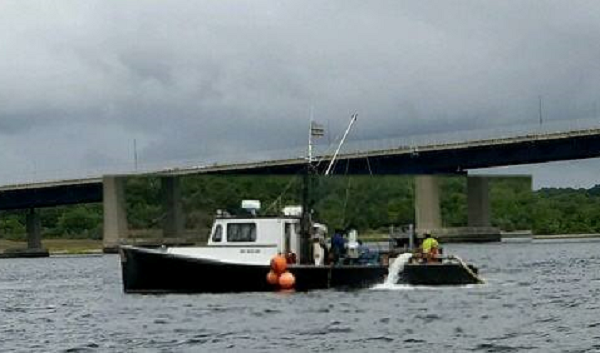 The dredge boats are not sinking.

According to a statement by Fall River’s Harbormaster Bob Smith, for the second time in the past week they have received very early morning emergency calls from a passersby on the Braga Bridge about a “boat sinking”. Emergency boats from Fall River Fire, Harbor Patrol, and the Harbormaster were all dispatched and coordinated with the USCG. In both instances it turned out to be the shellfish relay dredge boats digging up the river for quahogs. The picture above is one of these boats. They pump a huge amount of water overboard as they excavate the quahogs from the river floor sediment.

Smith has asked the Division of Marine Fisheries to include Fall River authorities in the supervision of these vessels in the waters so that the Harbormaster has an idea when and where they will be dredging. According to Smith, every request for cooperation from MA Division Marine Fisheries has been denied.

So Smith warns if you see a boat pumping water tht looks like the above photo, it may be a shellfish dredging vessel.