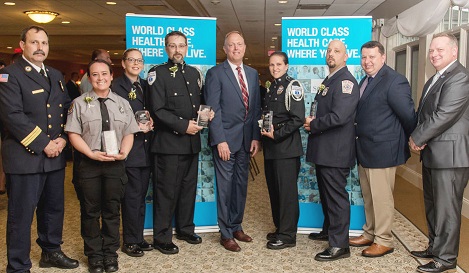 Dallas-based Steward, which operates nine hospitals across Massachusetts, recognized 19 EMS providers. Among these were Fall River EMS Lieutenant Cheryl Davis, and paramedics James Guilmette, Heather Littlefield, Charles Oldham, and Brittany Carlson. They were recognized for “going above and beyond” in their interactions with patients in communities served by Saint Anne’s Hospital.

The five local EMS providers were nominated by Fall River EMS Director, Timothy Oliveira, for their response on New Year’s Day to a devastating fire caused by a vehicle crashing into a 36-unit building in the Four Winds apartment complex in Fall River.

In part, wrote Oliveira, “Lt. Cheryl Davis immediately sized up the scene and set up a landing zone and requested Med Flight for a burn victim, including an additional medical rescue to the scene.

“While heavy fire conditions remained on the above floors above the vehicle,” he continued, “EMS crews began extracting the victims from the vehicle with the assistance from Heavy Rescue 1 utilizing the Jaws of Life. EMS crews do not have protective equipment to withstand structural firefighting operations or self-contained breathing apparatus, yet these paramedics did not hesitate to go into danger with fire above and a broken natural gas line.”

The three-story apartment building was destroyed by the fire. Although the two occupants of the car succumbed to their injuries, Oliveira noted, “Due to the efforts of our EMS crews from all initial responding units, many more could have been lost.”

Saint Anne’s Hospital President Michael Bushell noted that the heroism and professionalism demonstrated by EMS providers that day are testament to their dedication to serving the community.

“Every day, EMS providers throughout our communities help those experiencing health crises,” he said. “Many calls are due to motor vehicle accidents, heart attacks, or drug overdoses, but, as clearly demonstrated on New Year’s Day, they are trained and willing to help, no matter the circumstances. We are proud to partner with and honor all of the EMS providers who care for patients in and around Fall River.”

Massachusetts State Police Trooper Christopher J. Dumont, EMT-P, delivered the “Stewards of the Community” keynote address. Trooper Dumont helped save the life of Transit Officer Richard Donohue, who was shot by one of the 2013 Boston Marathon bombing suspects. Because of his heroic actions, Dumont received the Medal of Honor, the highest award given by the Massachusetts State Police.