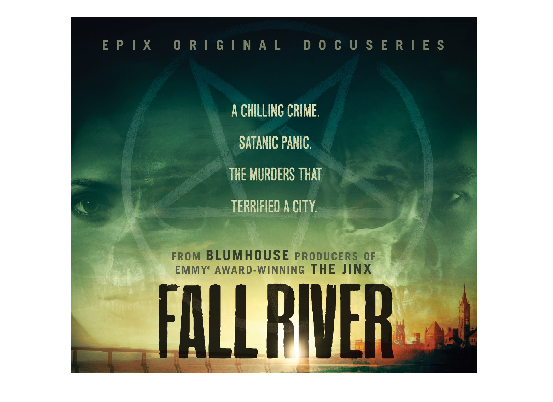 Premium network EPIX®, who previously announced that docuseries Fall River would debut on May 16 at 10pm has released a new trailer and the air date schedule for the series.

In 1979 – almost 90 years after infamous, accused murderer Lizzie Borden’s notorious acquittal – Fall River, Massachusetts would become home to another terrifying series of crimes. When three young women were killed in a streak of brutal murders, police alleged a satanic cult was practicing human sacrifice. The cult leader, a man named Carl Drew, was captured and sent to prison for life without parole.

1979 – Fall River, MA – home to the notorious Lizzie Borden, and a seedy hive of drugs, prostitution and organized crime. After a sex worker is found brutally murdered at a local high school, police uncover a Satanic cult, and a sadistic pimp, Carl Drew. As detectives race to secure the testimony of a witness, she becomes the next victim. Police go to desperate measures to prevent another Satanic sacrifice and are aided by 17 year-old Robin Murphy who provides them with answers.

Satan takes a prominent role in the bizarre 1981 trial of Carl Drew, as the “Satanic Panic” incites fear across the country. Carl’s claims of innocence are overlooked, leading to a shocking injustice. The lead detective in the case becomes so haunted by his own investigation that he pledges to undue Carl’s conviction. After a six year hunt for new evidence, he uncovers a shocking truth.

Through a prison interview, Robin Murphy’s harrowing account brings everything into question. Her story paints a picture of corruption and neglect that reveals a truth never before considered. An additional murder is revealed, previously thought to be unconnected to the case, that may put the puzzle together.

While Carl Drew appeals his case, a new witness is discovered who describes one of the murders. Filmmakers return to meet with Robin Murphy a final time. After compiling all the evidence a new possibility is presented that turns the case on its head. As the pandemic disrupts the documentary, filmmakers take their findings to an innocence program.

The air date schedule is as follows:

For the first episode of the series, click here.
Warning: Graphic images and nudity