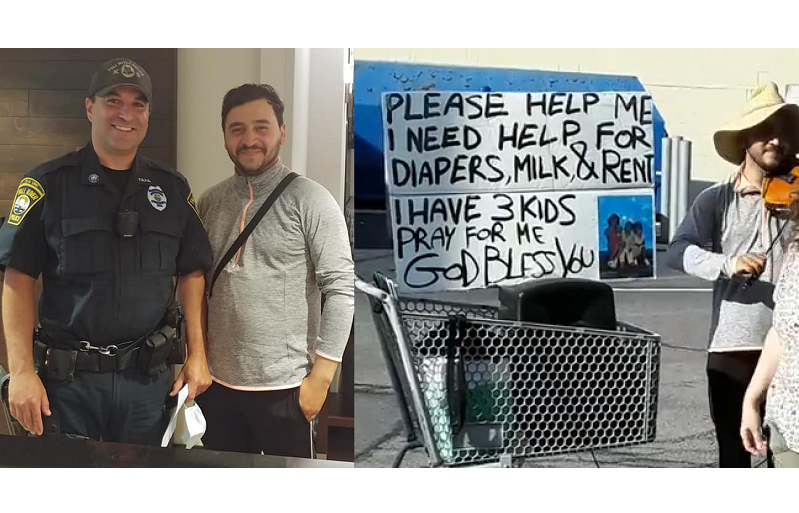 A Fall River Police officer is looking for the public’s help.

Kevin Lopes is looking to help a violinist who has been wowing shoppers at local shopping parking lots throughout the area. This story was brought to our attention by someone not affiliated with Officer Lopes and he granted us permission to share his story.

Here is the story told by Officer Lopes himself.

I NEED YOUR HELP!

So I worked last night and was called to remove a “pan handler” in front of Stop and Shop.” What happened next touched my heart and now I NEED YOUR HELP!

Many know that I’m a police officer and a musician. I spoke to the manager and security and they allowed him to keep playing.

We spoke in between songs and I got to know this talented musician’s name and contact info to maybe work with him in getting him some gigs playing solo or even with my concert band.

I thought to myself, this isn’t enough! Where was he staying tonight? His wife and three kids? Where were they? Did they make enough for diapers, milk and rent?

I asked him where he was staying and he began shuffling through his phone and said to me “I play all day and only know where I’m staying at the end of the day when I see how much I can afford to get food, diapers, essentials and then lodging.” He then told me “if I don’t make enough for a hotel, we sleep in my van.”

I met his wife and children who stayed in the van the entire time he was playing. All three children were younger than my kids and their smiles were ear to ear when I approached them. His wife smiled and said hello.

After watching him play and all the generosity I witnessed from so many citizens of Fall River, I knew they were able to find a hotel for tonight, but maybe for just a night.

So I called my wife and we made a decision and we hope that YOU can help US help THEM!

Amy and I got a hotel at the Hampton Inn in Westport for Friday and Saturday night and also donated $100 cash for them to get essentials and food etc.

As a dad I needed to help another dad to sleep comfortable knowing his kids will have a nice bed to sleep in.

I worked out a deal with Hampton Inn to allow YOU to call with a confirmation number to help pay for a night stay for this family. I was able to secure a discounted rate of $116.00 a night.

Once we got him settled into the hotel, he sat with me and we talked. This is his life.

Mr. Nicolae was born and raised in Romania and his family sent him to the Milan Musical Conservatory in Italy.

He was chosen as one of the top 3 violinist in the school and played in an amazing concert series in Italy.

He was met there by a talent scout and recruited to try out for Romania’s Got Talent.

He placed in the Top 5 in that competition and it was suggested for him to try out for America’s Got Talent at the Florida Auditions.

He came to America alone and left his pregnant wife and two children in Romania. He auditioned and was awarded a spot on the next show. They told him to return in a few months for the recording of the show and for performances.

He flew back to America with his family and began the process of becoming the next America’s Got Talent performer.

THIS IS WHERE HIS LIFE WAS FLIPPED!

His pregnant wife had major complications with the pregnancy and was hospitalized for over a week. They delivered their baby prematurely and he stood by his wife the whole time. He missed recordings and he received several phone calls about his absence.

After explaining the situation, he was cut from the show and encouraged to re-audition.

He and his wife decided they wanted to stay here in America to pursue their American Dream.

He applied for his work visa and permanent resident status, but needed a sponsor. He said he applied for jobs but due to COVID-19, no one was hiring and he wanted to do things the right way. He didn’t want to work “under the table” so he resorted to doing what he loves and does best. PLAY MUSIC!

He has been here for almost a year and he fears his dreams were slipping away.

I quote him, “Mr. Lopes I am not a poor man. I am rich with health and family. I don’t do drugs, I don’t drink alcohol, I don’t even smoke cigarettes. I play music and try to make some money making people smile! I need help and believe God brought us here. Thank you!”

We shared music videos of him playing and me playing music.

It was a great meeting.

I will me making some calls to help him with his work visa and permanent residential status. I will also help try and get him some gigs to earn a few extra bucks.

If there is anyone that can help, please message me!

Please consider donating a nights stay to give this family some comfort knowing that the money he makes playing can be a cushion for their future. A few days of peace knowing they have a place to come home to.

Money is tight for everyone, but look around you? Give that feeling of home for one night to this family.

I thank you so much!

Message me with any questions!

Update on Mr. Nicolae and his family!! 🙂

After getting to the hotel at about 10pm from playing all day and taking his family to eat… He called me up and we had a great conversation about what HE needs for him and his family.

I spoke to him about all of the outpouring of support from family, friends, community etc. and I could absolutely feel the emotion on the other end of the phone.

Many inquired about diapers, clothing etc. for the children. Also, clothes for him and his wife. Others inquired about hotel stay, gift cards, cash donations etc. Others offered employment, housing options, possible future musical gigs/performances.

I bore witness to an entire community come together for the good of this family and I know it was appreciated by him and his family.

After discussing all of the outpouring of support I asked him one question:

WHAT DO YOU NEED?

As a dad myself, I know pride and sense of worth can mean a lot. I don’t like to take hand outs for nothing. His answer blew me away.

He said, “I want to be an American Citizen!”

He elaborated by telling me that he takes pride in working and earning his money to provide for his family.

Music is his life and he loves to play for people and was seeking employment with a restaurant to play his music.

He then stated that he has filed his paperwork for a work visa and for permanent resident status and is awaiting the results. He asked me for help on this part as the process is a difficult one.

If there is anyone that can help with this (immigration, green card, visas, permanent resident) please reach out to me ASAP.

As far as nights stay at the hotel or clothing, diapers or cash donations he blew me away again and said “I do what I do by playing music because I love to play and there is no better feeling than to see smiles AND be able to provide for my family.”

It struck me as we were both the same. We both work and earn to provide for our families.

In one day, our community has covered his family for 22 nights at the Hampton Inn!!!

In one day, our community has donated via Venmo about $1,400 dollars!!!

In one day, our community has donated over 12 boxes of diapers!!!!

The final words he told me was this…”you are truly the first person to ask me what WE needed and have continued to reach out to help. Everyone that says I’ll call you to help, never called back!”

Well my friends and family, it is very evident to me that Mr. Nicolae is a decent, hard working, family oriented, prideful man who simply wants one thing.

To live the American Dream! To work for an honest days pay. To provide for his family and to play the music he loves!

SO WHAT DOES HE TRULY NEED AT THIS TIME:

2) Once his work visa is cleared, a job to provide playing at restaurants etc. Local bands/orchestras etc.

Please reach out to me if you can help me with #1!

We’ll get to number 2 and beyond in the future.

PLEASE DO NOT DONATE ANY FURTHER NIGHTS AT THE HAMPTON INN.

He was shocked at the 22 nights and said that with that generosity he would be able to still play and earn some money to put aside for the family.

He and I humbly thank everyone!!!

Today we will celebrate Fathers Day together with our families. He will be presented with the cash donations and will sit back and reflect on the true American Dream! Sitting together with friends family and celebrating the best job in the world!!!