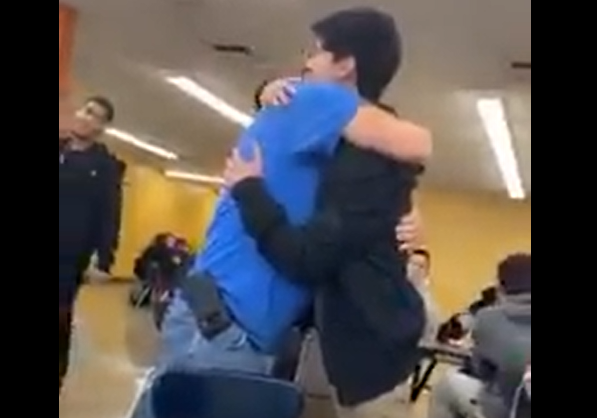 “My son Jack is a kid that talks to everyone. He’s 17 years old and graduating this year from Attleboro High School. He talks to the custodian, Tony, every day at school. They chit chat about a lot of different things. A couple of weeks ago he asked Tony if there was anything he really wanted for Christmas. Tony said…. “No.. no, I have everything I need.” So Jack said, “yeah but if you could ask for something, what would it be?” Tony said, “a new pair of boots because mine are getting worn out.”

“Jack got Tony’s shoe size by chatting a different day saying he’s working on a project in one of his classes, height vs shoe size.”

“The next day, Jack started talking to his friends about collecting money to get Tony Timberland boots. The money started coming in via Venmo and cash. Jack collected about $100 from his friends as the word spread! One of Jack’s friends works at Bob’s Store and got his discount on the boots. Here is the video presenting the gift to Tony. The woman is Tony’s wife and they gave her a candle.”

“It would be AWESOME to keep this kindness going.”