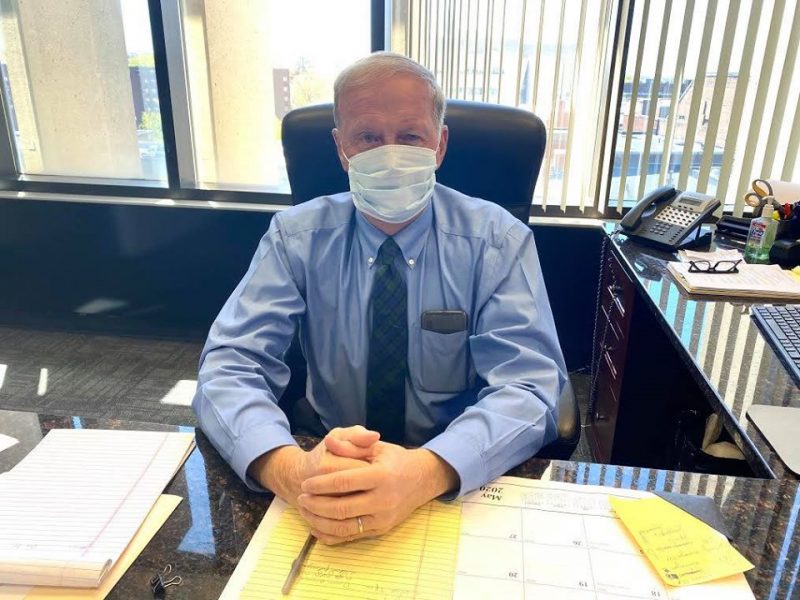 In an interview this morning with Keith Thibault of FRCMedia, Coogan stated that the number of cases, 97, was not indicative of a one day total.

“A number of positive cases were put in the system overnight (Tuesday), some dating as far back as 5/5.”

Mayor Coogan attributed this to a lag time that can occur when tests are taken at a nursing home or doctor’s office and a lump of confirmed positive cases come in at once.

The Mayor stated that today’s number will be more in line with the figures we had been seeing in recent days.

“The number this morning is much more consistent [with previous numbers]. It seems like we are back to where we belong.”

The higher confirmed COVID-19 cases can also be attributed to more testing being done in the city, according to Coogan.

“Our testing numbers are definitely starting to ramp up.”

Coogan pointed to the new SSTAR drive-through testing, along with the testing being done at Charlton, Primacare, and St. Anne’s Hospital. Rite-Aid is also beginning testing.

Thibault and Coogan also touched on the concern of cases in nursing homes. Coogan stated that he recently talked to several nursing homes including Southpointe and Carvalho Grove Health and Rehabilitation Center.

“Most nursing homes seem to have a handle on it, not a handle on the number of positives, but on how to deal with it.”

Coogan stated that when talking to Southpointe, the facility had approximately 27 cases and half or more of the patients had no symptoms.

Coogan stated that he has received some calls concerning people breaking COVID-19 guidelines and orders, but in some cases, the scenario wasn’t what it seemed. One instance in particular that Coogan pointed out was four people congregating at the dog park which turned out to be a family of four that arrived together at the park.

“Sometimes what you see and what is happening is two different things. In Fall River we have had tremendous compliance with masks and social distancing.”

Coogan went on to say that businesses are also co-operating and there haven’t been cases where business owners are threatening to open no matter what.

Coogan is also hoping that the economy is opened somewhat, but believes Baker is doing a good job in handling COVID-19.

“I hope the Governor loosens up the restraints on the economy a little bit and gives people some hope. Governor Baker is doing a good job overall. You don’t learn this in any Political Science class. You can’t call anyone and ask how they handled the last pandemic.”