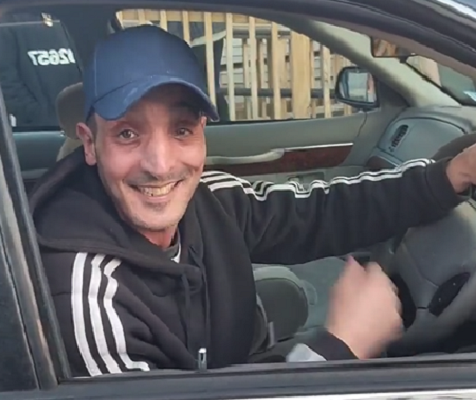 One thing you know about Fall River residents is that if someone is truly in need, they step up. This story is no exception.

Nichole Fontaine, who works as the homeless/substance use disorder advocate for the City of Fall River, meets many people who need all kinds of help every day.

Nichole, who is an addict in recovery herself, came in contact with Jared Moniz of Fall River who has had a rough go of it in life.

“At 21 his dad took him out to a bar and on the way home they crashed. His dad died instantly & Jared was hospitalized for over a year. He lost an eye, had to learn to walk again and broke almost every bone in his face. He, like so many of us, found opiates as a way to escape it all. His addiction took him to a very dark place robbing banks. He spent a good majority of his adult life in prison.”

According to Nichole, however, Jared has made a dramatic improvement.

“Thankfully, this time, Jared was tired of paying the consequences for drugs and he put in a lot of work. He has completely changed his life around and just completed parole. He comes to meetings regularly and co-facilitates the Sunday night meeting with me. He has had 5 years of recovery now.”

While Jared has been continuing on the right path, Nichole discovered that he ran into some bad luck.

“Two months ago Jared’s bike broke down and I knew that’s how he was getting to and from work to support his family. His family is everything to him. He even raises one of his grandchildren.”

This is when Nichole came up with an idea to help Jared and his family.

“I put a post on Facebook for donations to help replace his bike. So many people donated that I had over $500.”

The donations piled up so quickly that Nichole decided to dream even bigger.

“I decided to make another post saying we might as well try and get him a car! More donations flooded in. I called Kevin from Car Wars on North Main Street whose also in long-term recovery and he began looking for a solid car he could get us for a good price.”

The dream was made a reality and Nichole was able to gift Jared with a car. The amount of money raised was so overwhelming that there was even some money left over.

“Obviously people are struggling with the COVID lockdowns, but everyone gave what they could. So, we also had a little left over and it’ll go for his registration and some gas cards.

Despite the time and effort Nichole put in to help, she made it clear that it was totally a community collaboration.

“So many people pitched in for this. It was truly a community effort. A police officer I work with, the owners of Essential Wellness, a worker from Recovery Centers of America, and so many people of Fall River and surrounding communities who didn’t even know Jared.”

Nichole couldn’t think of a family more worthy of the gift.

“Jared’s fiancé Crystal Mello runs the Facebook group “Helping Hands” which takes in donations and gives everything back out free to those who need it. I truly couldn’t think of a family who deserves this more.”

Jared was totally floored by the gesture.

“I was in complete shock when I was given this life changing gift. I am so very grateful. I would just really like to thank everyone who donated and especially Nichole Fontaine for making this happen. Our family really needed a blessing like this. It just made things a whole lot easier for us. Words can’t even express the gratitude I have. I will do my best day by day to pay it forward.”

Nichole planned on booking his appointment at the RMV today.