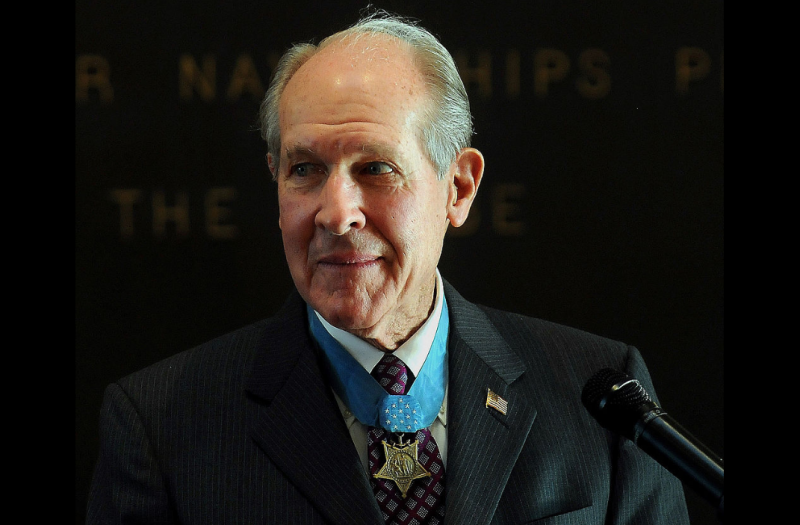 A commissioning ceremony will take place this weekend for a ship named after a hero and Fall River native.

The USS THOMAS HUDNER (DDG 116) is the 66th ARLEIGH BURKE-class destroyer and is named in honor of Medal of Honor Recipient CAPT Thomas J. Hudner, Jr., USN (Ret.). Hudner is a Medal of Honor recipient from the Korean War.

The ceremony is set to take place on Saturday, December 1, 2018 in Boston.

Captain Thomas Hudner, who was born and raised in Fall River, was a naval aviator who was awarded the Congressional Medal of Honor on April 13, 1951 by President Harry S. Truman for risking his life above and beyond the call of duty during the Battle of Chosin Reservoir during the Korean War.

Hudner passed away on November 13, 2017 in Concord Massachusetts.

As told by the Commissioning Committee, on December 4, 1950, pilots from VF-32, including both Hudner and Brown, were flying a mission in support of the Marines who were in the midst of a fighting withdrawal from Chosin Reservoir. During the mission, Brown’s Corsair was hit by anti-aircraft fire and he was forced to crash land. Violating a standing order not to attempt to land and aid downed pilots, Hudner purposely crash landed his own plane to provide aid to Brown. Even with an injury to his back caused by his crash landing, Hudner remained with Brown until a rescue helicopter arrived on the scene. Hudner worked with the helicopter pilot in the sub-zero, snow-laden area in an attempt to free Brown from the smoking wreckage of his aircraft.

For more information on the ship, the crew, and Captain Thomas Hudner, click here.