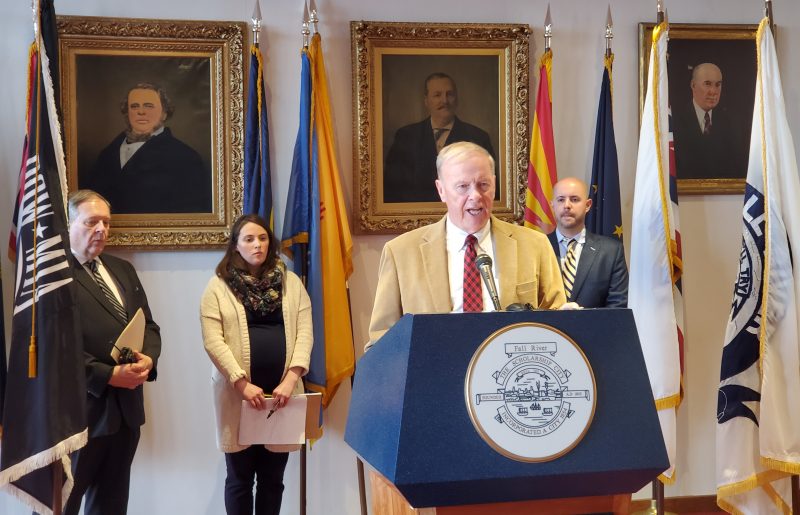 In an afternoon press conference, Mayor Paul Coogan stated that a State of Emergency has been declared for Fall River until further notice.

In addition to the State of Emergency, the following decisions have been made by the Coogan Administration in consultation with the Director of Health and Human Services:

• Government Center will be closed to the public starting Tuesday, March 17 through Friday, March 27. City employees will report to work as scheduled.
• City Inspectors from departments including Inspectional Services, Water, and Fire will only be conducting inspections in private homes in emergency situations
• Public safety, including Police, Fire, and EMS work will continue without disruption
• City Council Meetings including City Council Committee on Public Works and Transportation Meeting to be held on Monday, March 16th as well as City Council Committee on Public Safety and Public Hearings, City Council Committee on Finance Meeting and the Regular Meeting of the City Council to be held on March 24th have been cancelled
• Only essential Board meetings will be held until further notice
• All City playgrounds and play structures will be closed until Monday, April 6. Parks and open spaces will remain open at this time
• All Senior Centers and the Fall River Public Library will be closed until Monday, April 6
• Restaurants, bars, or clubs, in violation of the Governor’s takeout/delivery order will have their license suspended immediately. If your establishment does not currently have a delivery process in place you will limited to takeout only.
• City departments, the Fall River Police Department and Inspectional Services will be enforcing Governor Baker’s prohibition on gatherings over 25 people

Live update from Mayor Paul E. Coogan for an update on the preparedness response of the City Departments regarding the Covid-19 virus.

Temporary Police Chief Charles J. Cullen stated at the press conference that additional questions will be asked from callers to ensure safety.

Coogan stated that Fall River is a tough city and is taking these steps to keep residents safe.

“This is a very important fight. Never seen anything like it in my career.”

Coogan and his staff continued to reiterate social distancing and the community sticking together.