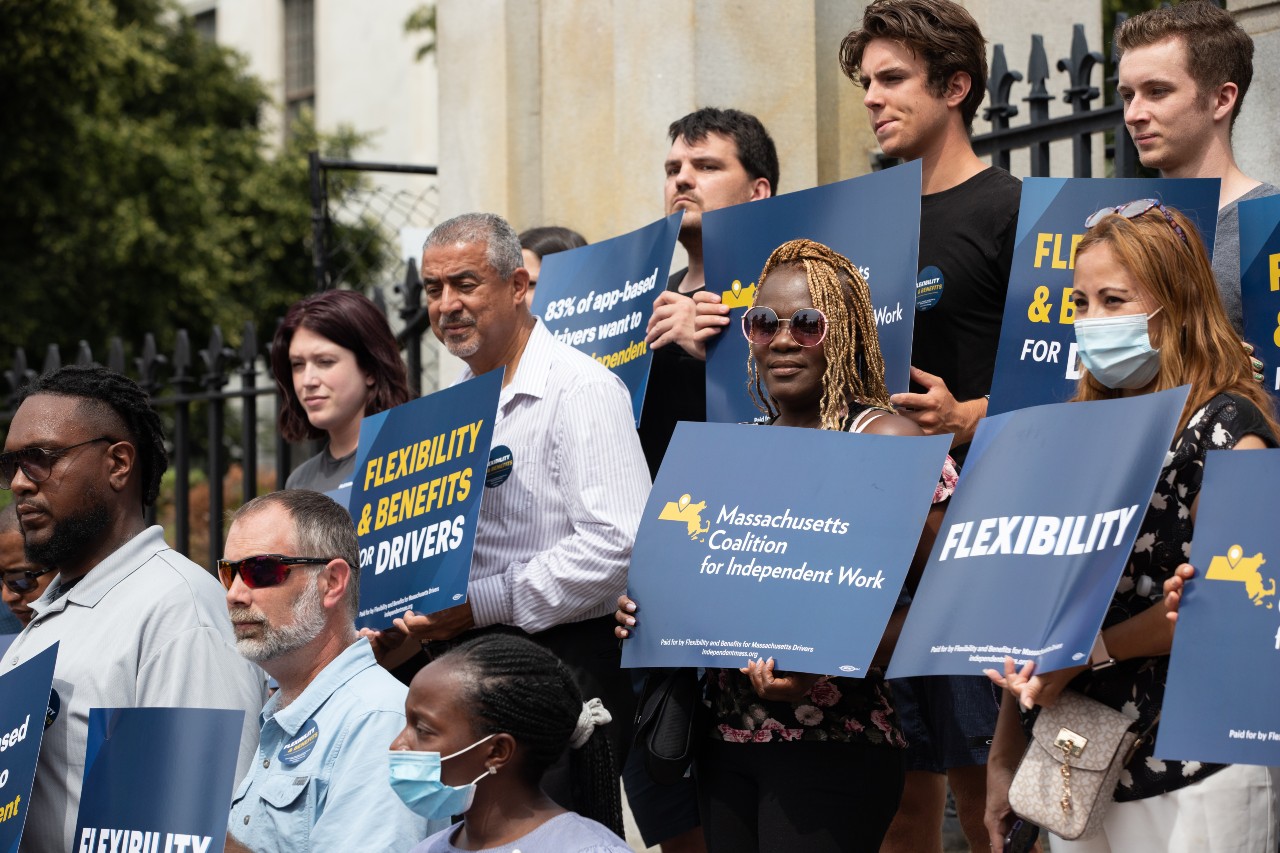 Supporters of a ballot question that would permanently declare app-based workers to be independent contractors gathered outside the State House on Aug. 3 to announce the proposal. Attorney General Maura Healey certified the initiative petition as eligible for the 2022 ballot this week, moving it to the next stage of the process along with 15 other potential ballot questions. [Chris Van Buskirk/SHNS]

SEPT. 3, 2021…..With a touch of nervous energy and fall crispness in the air, Labor Day weekend arrived, a bit more waterlogged than usual, to signal the unofficial end to a summer not quite as freeing as it once promised to be.

After more than a year of cloistering in self defense against an unpredictable virus, the summer of 2021 was supposed to be a coming out party fueled by widespread vaccination.

It may have started that way, for better or worse.

But as it ends, children are returning to school masked, businesses are rethinking back-to-office plans and public officials continue to push shots on the unvaccinated in a state where even its near-nation-leading vaccination rate hasn’t been able to stop the Delta variant from stressing some hospitals and spoiling everything from pool parties to potentially a Red Sox playoff run (though they did manage a split with the Rays).

The Department of Elementary and Secondary Education already pushed ahead with an indoor mask policy for all students, teachers and staff in K-12 public schools, and this week the early education sector followed suit.

Early Education Commissioner Samantha Aigner-Treworgy sought and received permission to impose a mask mandate for all staff and students age 5 and older in state-licensed daycare, after-school and other out-of-school programs licensed by the state.

Younger students between the ages of 2 and 5 will also be “strongly encouraged” to mask up if they are able when they return to their classrooms on Sept. 7.

Some members of the Board of Early Education and Care expressed interest in the possibility of a vaccine mandate, but Education Secretary Jim Peyser said such a step was probably beyond the scope of their authority, and would require an order from the Department of Public Health.

A vaccine mandate in nursing facilities, however, was not out of reach for Gov. Charlie Baker, who decided this week to expand his vaccination requirement for staff at long-term care facilities to also cover caregivers in rest homes, assisted living residences and hospice programs and anyone who provides in-home direct care.

The Public Health Council must vote to approve the policy next week.

Also next week, the Ways and Means Committees detailed plans to resume its inspection of how best to spend billions in federal American Rescue Plan Act. The Thursday hearing will focus on transportation, arts and tourism, climate, and infrastructure.

Gov. Baker continued to express his frustration with the Legislature’s deliberative approach to spending ARPA money, as a deluge of rain from Ida made its way to Massachusetts stressing water and sewer infrastructure and helping make his point that investment needs in the climate space are clear and immediate.

That’s not about to shake the Legislature off its course, however.

While Baker must, or at least chooses, to try to work with lawmakers, voters and advocacy groups who grow frustrated with inaction on Beacon Hill have another option at their disposal — the ballot.

After 28 initiative petitions were submitted for consideration, Attorney General Maura Healey on Wednesday certified 16 potential ballot questions as eligible for 2022, sending proponents on their way to begin the process of collecting an initial round of 80,239 voter signatures before the end of November.

The green-lighted petitions propose to do everything from bringing back the discounted drinks of “happy hours” and requiring voter identification at the polls to legalizing fireworks.

Tatyana Semyrog, chairwoman of the Committee to Bring Voter ID to Massachusetts, said the MassGOP-backed effort has already recruited 4,000 volunteers to begin collecting signatures next week.

Notwithstanding the battle expected to ensue over the proposed “millionaires’ tax” next year, the issue of how to treat and classify gig economy workers promises to be one of the marquee issues before voters, just as it was in California.

Healey has sued Uber and Lyft in an attempt to force those companies to classify their drivers as employees, which would require the companies to adhere to Massachusetts wage laws and offer appropriate compensation and benefits. The Democrat, however, has tried to separate that action from her office’s role in reviewing initiative petitions for their ballot eligibility, and did certify the question that would allow those gig workers to remain independent contractors with benefits.

While Healey’s politics did not match the outcome of that review, the Massachusetts Republican Party accused her of bias in her decision to reject a petition filed by MassGOP Chairman Jim Lyon’s wife Bernadette that would have required that “all reasonable steps, in keeping with good medical practice shall be taken to preserve the life of the child born alive.”

Healey’s office called the single-sentence proposal “highly ambiguous,” making it “impossible” to adequately inform voters about the meaning and effect of the proposed law.

Healey, of course, has made no secret of her support for laws guaranteeing women access to abortion, and that was on display this week as she responded to the Supreme Court’s 5-4 decision to allow a highly restrictive abortion law to take effect in Texas.

“We will fight this latest effort to overturn Roe v. Wade and stand up for freedom, privacy, and basic rights,” said Healey, far from the only Democrat animated by the ruling.

As she weighs a run for governor in 2022, Healey has lost her foil in the White House. The Democrat built her reputation, in part, on suing former President Donald Trump. But between the Sackler family, challenges to voting and reproductive rights and the student and auto loan industries, Healey’s not lacking for adversaries.

This week she announced what she described as the largest settlement of its kind, securing $27.2 million and debt relief for thousands of Massachusetts car owners who she said were victimized by predatory subprime loans made by Credit Acceptance Corporation.

Finally, moving from consumer protection to tenant protection, Boston Mayor Kim Janey responded to the cancellation by the Supreme Court of a federal eviction moratorium (and the lack of action at the state level) by imposing a local one in the city as she enters the homestretch of the preliminary race for mayor.

New polling suggests Janey is in a tight battle for the second spot on the November ballot, with City Councilor Michelle Wu sitting in the pole position. The preliminary election is on Sept. 14.