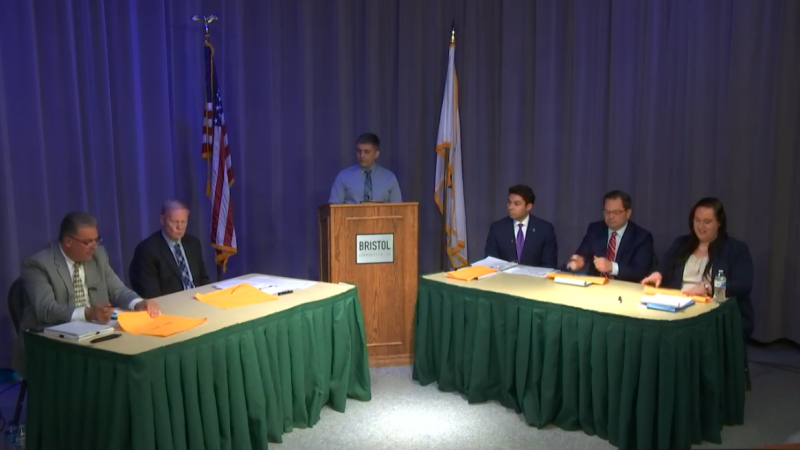 The format, which featured more specific policy questions and shorter response times than the mayoral debate a week ago, was fast-paced and covered a lot of ground on public safety, the opioid crisis, job creation, property taxes and how to stop the “brain drain” in Fall River.

Some patterns from the first debate reemerged: Mayor Jasiel Correia, the subject of the March 12 recall election, said his record in office should reassure Fall River residents that they should keep him in office despite the 13 federal fraud indictments pending against him.

A few other notable trends emerged as the candidates honed their final pitches to voters with less than a week to go until the March 12 elections.

Paul Coogan and Joe Camara are running as the adults in the room.

I see Coogan and Camara – who are arguably the two most serious threats to Correia’s reelection chances – running similar campaigns that Sam Sutter, the former Bristol County District Attorney, ran in the 2014 recall election.

In 2014, Fall River voters chose Sutter, who was then a popular two-term district attorney, to replace former Mayor Will Flanagan, whose administration was marred by severe dysfunction toward the end of his tenure.

In that election, Sutter ran on a platform of being a responsible and respected leader who would return stability to an office brought low by his predecessor. At the time, Sutter did not offer many detailed policy proposals. Instead, he positioned himself as the most experienced and competent adult in the room whose capable leadership would make Fall River an attractive place again to live and do business.

Coogan, a longtime respected educator in Fall River, repeatedly pledged to “restore integrity” to the office of mayor and provide “honest leadership.”

“You need strong leadership respected by the community,” Coogan said.

Camara is running primarily on his 23-year-record on the City Council, during which he said he has voted on a variety of measures to build new public schools, improve public safety and promote economic development.

Asked by moderator Michael Silvia, of the Fall River Reporter and New Bedford Guide, to explain how they would address the opioid crisis or make Fall River a more attractive place to work and live, Camara and Coogan tended to speak in generalities about the need to have good public schools, support services and recreational opportunities for young people.

The capable adult strategy worked for Sutter, who defeated Flanagan. But it was short-lived: Less than a year later, Correia defeated him at the ballot box.

That’s not to say, however, that concrete proposals were not made.

Camara said he would like to see two police officers assigned to a cruiser, and for regular warrant sweeps to be conducted in high-crime areas.

Scott Pacheco talked about holding absentee landlords accountable and said she had a “comprehensive plan” to fix the city’s sidewalks and streets. She also proposed a fellowship program where local government and other employers would bring on young people as interns and apprentices.

Regarding the opioid crisis, Coogan vowed that he would not hire a “drug czar” and recommended forming an advisory committee that would meet monthly to coordinate a response to the epidemic.

On economic development, Correia pointed to investing in wind energy, which he described as the “hottest industry right now in Massachusetts.” Correia said nobody else on the stage was talking about that obvious opportunity: “I’m not hearing anything new from my opponents.”

The challengers went after Correia harder than the first debate.

Already having absorbed several body blows in the first debate, Correia had to know more attacks were coming. But even he and his campaign aides seemed to be surprised at how aggressive the other candidates went after the incumbent mayor.

“I believe he is no longer fit to serve… I believe our mayor has lost his ability to lead,” Camara said.

Scott-Pacheco repeatedly criticized Correia for being a self-serving politician who resorted to an “11th hour” stunt to get votes by canceling the unpopular Pay As You Throw Program last month. She said there was not only a “dark cloud” hanging over Fall River, but also “a green cloud” of marijuana money hanging over Correia, who she described as a special interest unto himself.

“Jasiel Correia has shown an inability to be honest with people,” said Riley, who was the most restrained candidate in the debate.

Annoyed that Correia had accused him and the other candidates of shamefully “putting Fall River down” with their criticisms, Coogan said he felt like he was on a comedy show, and said that Correia, “with his antics in the federal court system,” had hurt the city.

Camara seemed to be just as worked up over Correia’s line about his words putting down Fall River.

“Nobody has done anything more to put this community down than this current mayor,” Camara said.

To use a boxing analogy, Correia – who focused mostly on defending his record in the first debate – took off the gloves in Debate #2.

Also bristling at Coogan’s criticisms that his behavior has turned off employers and potential residents from moving into Fall River, Correia called it “the most ridiculous thing I’ve ever heard,” and deployed this zinger: “Maybe after March 12, Mr. Coogan will move back to Somerset.”

It could have been a strategy or a result of the debate’s quicker format, but Correia did not directly respond to any of Scott-Pacheco’s attacks. He did, though, get into it with Camara, criticizing the city councilor’s efforts to advocate for the residents of Riverview Towers. The mayor accused Camara of wanting to create 93 units of project-based housing.

That charge created the unusual sight of two rival candidates – Scott-Pacheco and Camara – joining forces temporarily to blast the mayor for not caring about low-income and senior residents.

“Please don’t come up with fake facts and tell me what I tried to do,” Camara said.

To their credit, though, after the tough words were exchanged and the closing statements delivered, the candidates shook hands and exchanged pleasantries before returning to the campaign trail.