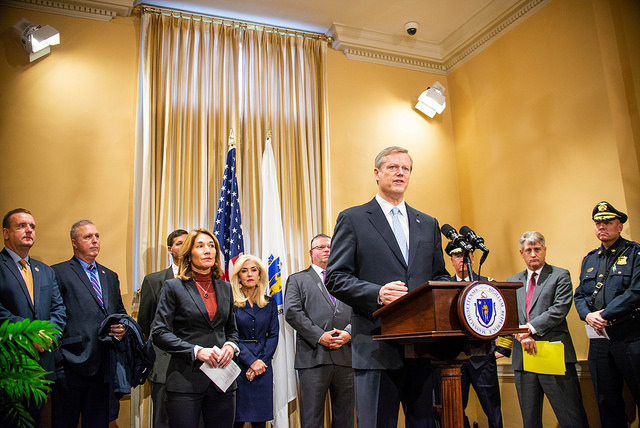 BOSTON – Governor Charlie Baker Monday filed legislation seeking $5 million to support a regional, multi-agency approach to fentanyl interdiction and crime displacement by Massachusetts municipal police departments. The pilot program was developed in concert with many Massachusetts police departments interested in a regional approach to the epidemic.

“The presence of fentanyl and the drug dealers who sell it continue to be fueling factors in the deadly heroin and opioid epidemic,” said Governor Baker. “We are confident that the increased communication and coordinated police work this legislation supports will lead to safer communities and we urge the Legislature to enact this bill promptly.”

“This legislation will begin a regional approach to go after dealers who too often can evade authorities by moving to another nearby location in a different municipality,” said Lt. Governor Polito. “We are grateful to the brave first responders on the front lines of this epidemic every day and are eager to see the results that a regional approach can produce.”

Historically, when law enforcement conducts multiple coordinated drug arrests in a particular community, the drug dealers not caught up in the sweep move their operation to a neighboring community and continue to sell. Participating police departments will coordinate regionally to execute arrests that take dealers off the streets. The funding will help supplement surveillance work and overtime costs for units engaged and officers in the field will also work to get buyers into treatment.

“Communication and information sharing in a coordinated fashion among local police departments will multiply our ability to stop this deadly drug from reaching the streets,” said Secretary of Public Safety and Security Daniel Bennett. “We are grateful for the strong interest shown by local law enforcement in this partnership and look forward to achieving positive results in these communities.”

“Communities and Police Departments across the Commonwealth deal with the impact of the heroin and fentanyl epidemic facing our country,” said Dudley Police Chief Steven Wojnar, President or the Massachusetts Chiefs of Police Association. “Every city and town has illicit drug activity and often limited financial resources to address it adequately. The constant movement of dealers from place to place adds to the challenge of apprehending those responsible for distributing these deadly substances on our streets. Thanks to the efforts of the Baker-Polito Administration and the Legislature, we are pleased to have funding opportunities, such as this, to assist us in easing the financial burden associated with drug interdiction efforts. Equally as important, this program encourages the sharing of data and resources amongst agencies to have law enforcement work together more effectively to combat this serious problem on a regional basis.”

“The Governor’s innovative regional approach will go a long way to promote enhanced cooperation among law enforcement agencies and departments which will benefit every community in the Commonwealth with their efforts to combat the scourge of fentanyl and addiction,” said Donald Caisey, President of the Boston Police Detectives Benevolent Society. “This is truly great news. Unfortunately fentanyl is one of many nightmares we all share.”

“The Massachusetts Coalition of Police appreciates the efforts of the Governor and the Lt. Governor in their attempts to assist law enforcement in stemming the flow of Fentanyl to our communities. This legislation will save lives and protect the people we serve,” said Scott Hovsepian, President of MASSCOP.

Overall in 2017, there was a 4 percent decrease in opioid-related overdose deaths from 2016, according to the latest quarterly opioid-related deaths report released by the Massachusetts Department of Public Health (DPH). However, the presence of fentanyl in overdose deaths rose to nearly 90 percent in 2018, underscoring its impact as the driving force behind the opioid epidemic in Massachusetts.

In August, Governor Baker signed An Act for prevention and access to appropriate care and treatment of addiction. The law is the Baker-Polito Administration’s second major legislative action to address the opioid crisis since taking office in 2015, and expands the Commonwealth’s prevention, intervention, treatment and recovery strategies. Building on the STEP Act which instituted the nation’s first seven day limit on new opioid prescriptions resulting in a 30 percent decline in opioid prescriptions, the law creates a commission to establish credentialing standards for recovery coaches; expands the use of medication assisted treatment in emergency departments, five Houses of Correction, and four facilities at the Department of Correction; and requires all prescribers to convert to secure electronic prescriptions by 2020.