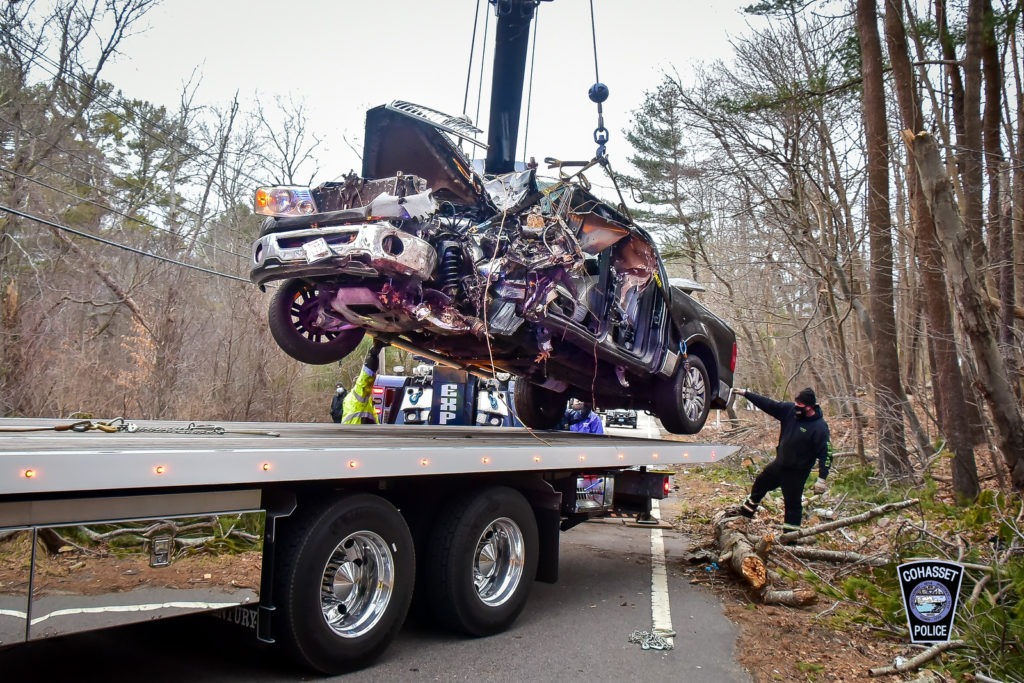 COHASSET — Chief William Quigley reports that the Cohasset Police Department responded to a serious motor vehicle crash on Route 3A this afternoon.

At approximately 2:05 p.m. Thursday, members of the Cohasset Police and Fire Departments responded to a report of a crash on Route 3A just south of Stop and Shop Plaza.

Upon arrival, officers observed a 2016 Lincoln pick-up truck with heavy damage that had been driven off the road and collided with a tree. The operator of the truck, a 51-year-old Acushnet man, was pinned inside the vehicle and unable to move.

Crews from Cohasset Fire, along with an ambulance from Scituate Fire, arrived and began the process of extricating the driver using hydraulic rescue tools, which took more than 40 minutes.

Witnesses on scene stated that the truck was travelling northbound at a normal speed on Route 3A when the driver suddenly veered into the southbound lane, clipping a 2014 Toyota Highlander that was being operated on the southbound side of the road. The truck continued into the woods, striking a large tree.

The driver of the truck was transported to a nearby hospital with injuries that are believed to be serious but non-life-threatening. The driver of the Toyota, a 50-year-old female from Scituate, was uninjured.

Both vehicles were totaled in the crash.

Route 3A was closed for more than 90 minutes while crews worked the scene. The crash remains under investigation by Cohasset Police, and no charges have been filed at this time.